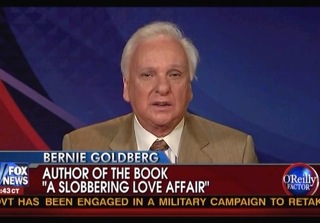 The post-hurricane debate over how the mainstream media treated the threat raged on last night, as the many factors in play led to various theories on whether Irene was sufficiently covered. On last night’s O’Reilly Factor, Bernie Goldberg argued that one of the main reasons the media cared so much about Hurricane Irene was “because it was heading for the center of the universe,” and that a larger hurricane heading for a different region wouldn’t have gotten the attention– though giving the caveat that “hurricanes are dangerous things and they’re no fun to go through.”

Goldberg made the point to host Bill O’Reilly that it was not just the large size of New York that made it such a media target, but that it is where “media elite journalists live,” and that many who cover the news suffer from “journalistic narcissism.” By way of contrast, Goldberg argued that, were “a bigger hurricane heading for Biloxi, Mississippi… it just wouldn’t get the same attention.”

O’Reilly disagreed, offering an alternative explanation for the media blitz surrounding the hurricane: Katrina. Besides the fact that “it’s the end of August, nothing else is going on,” the fact that the media was caught almost as flat-footed as the government by Hurricane Katrina left them hyper-sensitive to the potential of another nightmare scenario. While Goldberg didn’t back down on his claim that the New York factor contributed majorly to the coverage, he agreed that “in the post-Katrina age, nobody’s taking chances anymore,” nor are political leaders “going to get caught on the wrong side of the hurricane.”