Bernie Goldberg On Fox/White House War: ‘What Did They Think They Were Going To Gain?’ 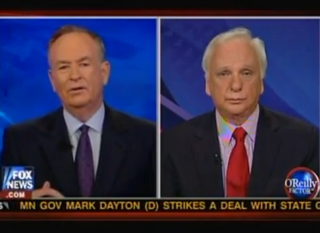 Bernie Goldberg is not entirely sure the ceasefire between the White House and Fox News is permanent. On tonight’s O’Reilly Factor, Goldberg discussed the newly released emails regarding the White House/Fox wars of last year, and while the relationship between Fox and the Obama administration has certainly improved since then, Goldberg wasn’t quite ready to trust yet. “It suits their purpose down the road to start up the war again,” he hinted, adding that the White House was playing with fire: “when you go to war with an entire channel, you got to war with their viewers.”

Goldberg told Bill O’Reilly he found the emails petty, and betrayed the fact that the White House officials were in the “big leagues.” “The emails that were released tell us something important,” he argued. “Politicians in the White House are willing to look you in the eye and lie to you.” While Goldberg acknowledged that this doesn’t really distinguish these politicians from any other politicians, he did add that “it was supposed to be different” according to the President’s campaign promises. “Somebody needs to tell Barack Obama, if he hasn’t figured it out already, that he isn’t the mayor of Chicago,” Goldberg quipped.

He also took another shot at Fox News’ detractors and their insistence on attacking the opinion side of the network. “What is it about these supposedly sophisticated people who are either unwilling or incapable of distinguishing between news and opinion?” He laughed off the idea that, as some emails claimed, Bret Baier was a “lunatic”– “there may be some lunatics roaming the halls up where you are, but it isn’t Bret Baier.” As for the dead fish threats, there O’Reilly jumped in– “By the way, I did not get a mackerel from the White House.”