Bernie Goldberg On Media Bias In Favor Of Occupy Wall Street: ‘There Is No Hope For Them’ 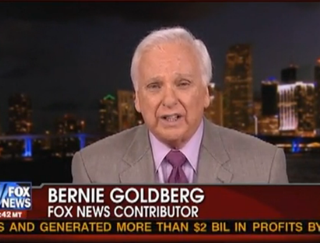 As the Occupy Wall Street movement continues to refuse to budge from lower Manhattan’s Zuccotti Park, tonight on the O’Reilly Factor resident media critic Bernie Goldberg took a look at how the media has treated the movement. Ultimately, he gives guest host Monica Crowley a grim prognosis for the media’s chances at being fair towards the movement in the same way they were (or were not) to the Tea Party: arguing that “the storyline is set in stone,” he concludes “there is no hope for them.”

The attitude in the media towards Occupy Wall Street, Goldberg, argues, is far too favorable because “if they [the media] share your values, you will get an easy ride.” In contrast, the Tea Party, being conservative, was molded into a narrative where “conservatives are people who aren’t very nice and, frankly, racists,” while the Occupy Wall Street folk are “young idealists, the American version of the Arab spring.” Crowley noted that the coverage of violence and anti-Semitism at the events was lacking, which Goldberg compared to that of racism in the Tea Party. “I’m not saying at all that these anti-Semitic signs are representative of the whole movement,” Goldberg argued, but that “the racist sign at the Tea Party was also an outlier.”

While Goldberg admitted he didn’t want to end the segment pessimistically, he found that the lack of critical coverage of Occupy Wall Street didn’t inspire many good feelings. “There are people who sell Slurpees and cigarettes to insomniacs at 7/11 on the overnight shift who have more introspection than journalists who cover important events in our country,” he railed. “They will never look inward; they will never see their biases.” “There is no hope for them,” he concluded grimly.”