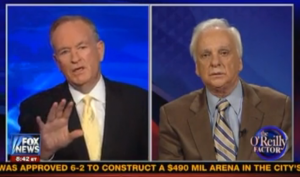 On Monday night, Bill O’Reilly invited Bernie Goldberg to respond to Ted Koppel‘s recent appearance on O’Reilly’s show, wherein he criticized the network’s “ideological” coverage. Goldberg pointed out that while Koppel is smart, he’s simply not thoughtful when it comes to media issues and made incorrect conclusions about the network.

Koppel only knows one thing about Fox News, Goldberg said. “He knows he doesn’t like it.” He added: “This is embarrassing for someone who is about to do a story on cable television news.” Koppel’s remarks reveal the “tremendous gap in his journalistic knowledge,” he observed. He further deemed it “shallow” and “unsophisticated.”

Responding to O’Reilly’s comment that Koppel essentially called O’Reilly and Sean Hannity a destructive force, Goldberg said Koppel does believe that cable news is a “polarizing force” and not good for the country. That’s a “perfectly good news story,” he said — and even he would agree with Koppel in certain respects. But he can’t handpick information that supports his conclusion, Goldberg asserted. Koppel couldn’t acknowledge contributors like Kirsten Powers, Charles Krauthammer and Juan Williams because “that would’ve screwed up his conclusion.”

Goldberg concluded by arguing Koppel doesn’t understand the most important aspect of Fox News: It “gives a voice to people.” People who he argued wouldn’t otherwise be let into the national conversation by the mainstream media.

“Ted is a smart guy” who’s “done a lot of good work in his career,” Goldberg said — but “he’s not a terribly thoughtful guy when it comes to issues regarding the media.”