Bernie Goldberg: Newsroom Diversity Is To Blame For Opinion Journalism 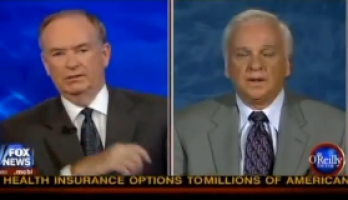 “They pretend to be a journalist, and at the same time they’re saying, ‘I’m not a journalist’ … they then state as facts things that aren’t facts at all.” That’s not a quote from Anita Dunn, who made similar claims railing against Fox News: No those are the words of pundit Bernie Goldberg two weeks ago.

But last night, Goldberg was back on “The Factor,” defending FNC against what Bill O’Reilly called the “White House jihad against Fox.” Along the way, he dropped the bombshell of a theory that (liberal) women and minorities in the newsroom were responsible for the death of traditional journalism — and O’Reilly partially agreed.

O’Reilly brought out the big guns last night to break down what he called “the White House jihad against Fox News” — Brit Hume, Juan Williams and Mary Katharine Ham all opined on White House Communications Director Anita Dunn‘s recent critique of the network. But it was O’Reilly’s regular media critic Bernard Goldberg who offered the frankest assessment. Namely, the WH attack on Fox was due in part to Rahm Emanuel‘s “fit of macho.” “Rahm Emmanuel turned on the TV Set in the White House one day. He saw one too many things on Fox that he doesn’t like, and in a fit of macho, he declared war on Fox News!” But Goldberg was just getting started.

In a discussion about the death of traditional journalism and the rise of opinion journalism to take its place, Goldberg posited that the sudden rise in “opinion media” — that is, the very thing Anita Dunn criticized Fox News for practicing — is due to the “diversification” of the news room:

>>>Next: O’Reilly agrees, but dodges a bullet. Plus, video.