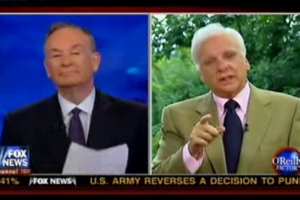 On last night’s Factor, regular guest Bernie Goldberg was on to judge the media’s reaction to the Gen. Stanley McChrystal/Rolling Stone scandal, and it was mildly surprising to see both of them defend the magazine, even though the piece’s author, Michael Hastings, is a “card-carrying unabashed lefty.” More surprising, though, was to watch Goldberg turn on talk radio, saying it “depressed him” and that its “hypocrisy” on the matter “is enough to choke a horse.”

While blaming the entirety of the McChrystal fiasco on the general, noting that “it just amazes me that a general could be so breathtakingly unsophisticated as to do an interview with these guys,” he gave Rolling Stone the right of way to publish it, because a media outlet that protects the government or the military is dangerous. And then, suddenly, he lashed out at conservative talk radio for blaming the scandal on President Obama:

“When you say the media, let me include in the media talk radio for a second. I was listening to it today, and I’m depressed. I’m really depressed. There are a lot of my conservative friends out there who are blaming Obama for this, who are blaming Rolling Stone for this. You know, it isn’t Obama’s fault. The hypocrisy is enough to choke a horse. If some liberal member of the military said something about George Bush or Ronald Reagan— the sainted Ronald Reagan– that either one of them didn’t like, and Bush accepted his resignation–“

At this point, Bill O’Reilly interrupts to point out that that did happen, with Reagan, to which Goldberg quipped, “and I don’t remember talk show hosts or their brilliant callers dialing in to condemn George Bush.”