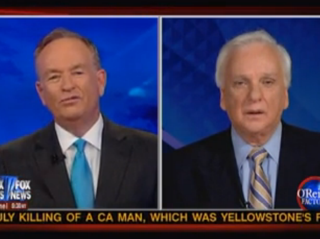 Distrust in the media, according to the latest numbers, appears to be at record highs. On tonight’s O’Reilly Factor, host Bill O’Reilly aired the results of a Gallup poll showing almost half of Americans think the media is “too liberal,” and that Fox News was overwhelmingly the television news source of choice. Why are Americans sensing this bias, according to poll results? Guest Bernie Goldberg argued it was because, in the post-Obama era, the media didn’t show bias, it showed activism.

47% of Americans, according to Gallup, thought the media was too liberal; only 13% found it too conservative. At 19%, Fox News was by far the most watched news source, with local news at 16% and MSNBC at 6%, which O’Reilly reveled in by calling those viewers “Fidel Castro supporters.” He turned to Goldberg and opened by asking about the latter’s former employer, CBS: “What happened over there?” Goldberg noted that the turnover in the anchor chair had hurt, but the downturn was not limited to that one station and had one particular origin: “its relationship with Barack Obama.” He elaborated that the media had always been biased, but “they moved from old-fashioned media bias to something new, media activism.”

This Goldberg equated with judicial activism– attempting to have a political impact from a pulpit that has no official political capacity– and the American people noticed. “There’s a price the media has to pay for [activism],” Goldberg concluded, “and they pay with their most valuable asset– their credibility.”