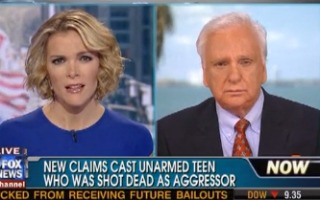 On her show Tuesday, America Live host Megyn Kelly addressed newly-revealed witness testimony about the night Trayvon Martin was shot by George Zimmerman in a Sanford, Florida neighborhood. “Some are now questioning,” said Kelly, “why this case is getting so much attention, while other murders involving African American children and teens get so little.”

She then played a clip from Monday’s edition of The Rush Limbaugh Show, where the conservative radio host shared that “it is the left that doesn’t see the humanity in people, they see the surface. It’s the left who sees black and white, male and female, gay and straight, whatever, because they groupify everybody and victimize everybody. They don’t ever just see people.”

Kelly invited Fox News analyst Bernard Goldberg onto the show to discuss the matter. “While no decent person is happy about what happened, no matter what your politics,” he said of the shooting, “there are some people whose purposes are served by what happened. And I’ll tell you about the two: The national media. The national media doesn’t do stories about black-on-black crime. It doesn’t interest them. They don’t do stories about black-on-white crime, which happens in far, far greater numbers than white-on-black crimes. They don’t do those stories either. But this is like a movie script handed to them from Hollywood. ‘Oh my goodness! A white guy — or, in this case, a white Hispanic guy — shoots an unarmed black kid. Perfect story.”

Goldberg pointed to the media’s pervading descriptions of Zimmerman’s race and ethnicity, opining that, if he had done something positive, he’d have solely been described as “Hispanic” (or, perhaps, Latino), rather than as a “white Hispanic.”

“He’s only a white Hispanic,” said Goldberg, “because they need the word ‘white’ to further the storyline, which is ‘white, probably racist vigilante shoots unarmed black kid.'”

“Race,” he continued, “is the wound in this country that never seems to heal.”