Bernie Goldberg To O’Reilly: Ed Schultz Is ‘Not A Journalist,’ So He Can Accept Money From Unions 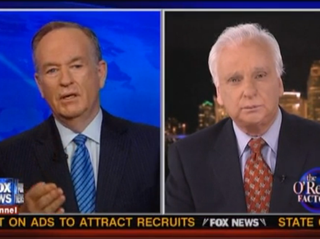 strong>Bernie Goldberg and Bill O’Reilly don’t think that Ed Schultz is much of a journalist. That is not exactly news, but for the fact that Goldberg used that line of attack to actually defend Schultz from claims that he is in violation of NBC journalist policy for having accepted $200,000 in speaking fees from unions. “I agree it’s wrong,” Goldberg told a somewhat outraged O’Reilly, “but it’s not a violation of MSNBC standards.”

O’Reilly harkened back to the days when both O’Reilly and Goldberg were at CBS, noting that the policy there banned any exchange of money between reporters and subjects. “They would throw us out so quick, we wouldn’t know what hit is,” Goldberg added, but he had a simple explanation for why the story that Schultz had received as much as $200,000 in speaking fees from unions last year didn’t impugn him as a journalist: he wasn’t one. “Ed Schultz and a lot of others on television are not journalists,” he explained, “but they do shows where they sit behind desks that look like anchor desks, they interview people… it sort of looks like journalism, but it’s not.”

O’Reilly agreed, noting that Schultz was a radio talk show hosts, and “they can do commercials, they can juggle on air”– anything. But on NBC, O’Reilly wondered why the fact that he didn’t disclose his fees was not in “flagrant violation of NBC News standards.” The way standards are written there, Goldberg countered, it was fine. Goldberg believed that, in the name of fairness, “absolutely he has to tell the viewer that he has a vested interest,” but on the other hand, unions “they would’ve gotten [support] for free anyway” from Schultz because of his ideology.