Bernie Goldberg To O’Reilly: If Zimmerman Were Black, ‘We Wouldn’t Know The Name Trayvon Martin’
video

Bernie Goldberg To O’Reilly: If Zimmerman Were Black, ‘We Wouldn’t Know The Name Trayvon Martin’ 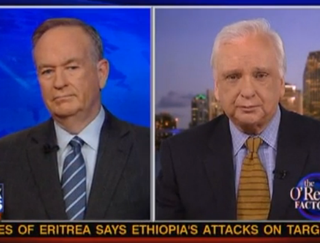 Bernie Goldberg isn’t buying the fact that the killing of Trayvon Martin would have gotten as much national attention as it has if the teenager had not been killed by a white person. Goldberg joined Bill O’Reilly today for his usual weekly commentary and noted, with the caveat that “all decent people should want justice,” he could not see civil rights leaders as up in arms as they are today if this story did not have potential racism in it, because “they don’t want to air their dirty laundry.”

“All decent people should want justice in this case, and if there is a crime that has been committed, the criminal should be punished,” Goldberg told O’Reilly. That said, Goldberg argued that the treatment of the story was “appalling”– “if Trayvon Martin would have been shot and killed by another black teenager, President Obama wouldn’t have commented, Al Sharpton wouldn’t have had rallies.” He compared the story to one of a black infant who was shot with an AK-47 during a gang incident by a black shooter, whose name didn’t make the media. “In one case, the shooter had light skin, and in the other case the shooter had dark skin,” he concluded.

O’Reilly countered Goldberg’s claim with coverage from the Factor itself of 49 shootings over St. Patrick’s Day weekend in Chicago, cases of black-on-black violence. He suggested these did not fit a narrative that “the black community has to be protected from people of different color– and remember, Zimmerman is 50% Hispanic– has to be protected from them.”

Goldberg jumped on the “Hispanic” part of that case (Zimmerman is half Peruvian) and argued that the New York Times only referred to Zimmerman as a “white Hispanic” because “they need the word white in there to further the storyline which is white vigilante kills black teenager,” and not because Zimmerman has obviously white skin and is half non-Latin American white.

The two also discussed Rev. Al Sharpton’s role in the story, which O’Reilly and Goldberg agreed was unethical. “It’s one thing to have an opinion on an opinion show,” Goldberg argued, and another “to lead rallies and do your show from the side of the rally, that is ridiculous.” He suggested the head of the network should tell Sharpton to choose between those activist rallies or the program, but not do both.