Bernie Goldberg To O’Reilly: NBC Should ‘Cut Their Relationship’ With ‘Irresponsible’ MSNBC
video

Bernie Goldberg To O’Reilly: NBC Should ‘Cut Their Relationship’ With ‘Irresponsible’ MSNBC 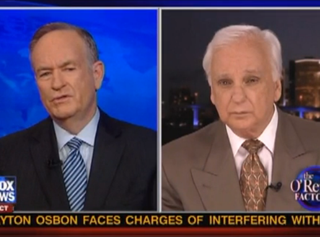 With NBC investigating how a tape of George Zimmerman‘s 911 call on the night he killed Trayvon Martin got edited to make him appear more racially aware than he was on the tape, many are wondering whether it was an intentional move. On tonight’s O’Reilly Factor, Bill O’Reilly and Bernie Goldberg discussed the matter, ending up on the topic of Al Sharpton‘s political rallies and Goldberg finally advising NBC to break off from its cable news wing, MSNBC.

“I think it was just a mistake from the segment producers,” O’Reilly noted to begin the segment about the NBC editing case, but added, “obviously that can’t stand.” Goldberg also did not venture to draw a conclusion, but he questioned just how long an investigation into the matter should take, and accused them of having a” bunch of PR people.. figuring out how to spin this best to the American public.”

The two then centered on MSNBC’s coverage, with O’Reilly admitting “I don’t really know what they’re doing over there now” because they don’t “have a newscast.” He had kind words for Sharpton’s program, or at least noted that “the guy’s lively, if he’s bringing numbers, more power to them,” but he questioned what his status was on the network: “Is he a show host, or a national activist?… I don’t understand what it is.”

At this point, Goldberg suggested to NBC it was time to amputate MSNBC. “I think they need to cut their relationship with MSNBC… MSNBC at times is so irresponsible that it rubs off on NBC News,” calling the continued relationship “a big mistake.” O’Reilly added “the numbers are miniscule, they’ve been on the air 16 years… they don’t go anywhere, so I’m with you.” He praised Tim Russert as an NBC personality that was fair, but found that “that’s becoming less and less and less over there.”