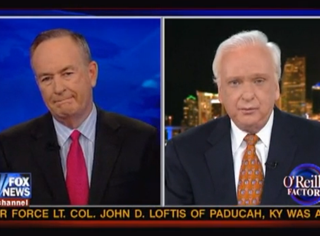 With gas prices increasing at a perilous rate, Bernie Goldberg took a look on tonight’s Factor at the way the media has been reporting the story, and found the stoic disposition of many broadcasts to clash starkly with the emotional accounts from when the same news came to America during the Bush administration. As he told Bill O’Reilly tonight, he concludes that the difference in passion in reporting was attributed to the fact that “too many journalists today are acting like stenographers and not reporters.”

RELATED: Bernie Goldberg Fumes To Bill O’Reilly Over ‘Bigotry On The Right’: ‘I’m Sick Of This’

Goldberg did not exactly object to the emotion in the Bush-era reports, but in the inherent difference in the two reports given how similar the news is. “the tones are almost unemotional [today], but four years ago they were very personal,” he explained, concluding that “reporters get more excited about covering bad news when a Republican is in the White House.” He hoped that journalists would inspect and hold the Obama administration as accountable as the Bush administration.”

“It has to be blatant bias,” O’Reilly responded, adding that the media was “protecting” President Obama by “choosing to do four times as many stories about rising oil prices under a Republican than under a Democrat.” He called it a “sin of omission”– again highlighting the lack of emotion in the coverage today, rather than the apparent emotion and editorializing in the past. “They have a lot invested in him,” Goldberg noted of the President.