Bernie Goldberg to O’Reilly: Tea Partiers Are the Real RINOs in the GOP
video

Bernie Goldberg to O’Reilly: Tea Partiers Are the Real RINOs in the GOP 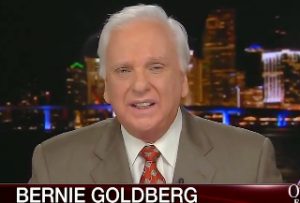 Bernard Goldberg joined Bill O’Reilly Monday night to address what he believes is a “potentially fatal split” in the Republican party’s immediate future. He said that if the tea party keeps rejecting anyone who isn’t basically Ted Cruz for the 2016 presidential nomination, the party’s going to be in some big trouble and invite in a strong Democratic victory.

O’Reilly framed the fight as a “classic moderate Republican versus hard-right Republican” feud, and Goldberg rejected the “ideological rigidity” of people who will sit on their hands and refuse to vote for a Republican presidential nominee if they aren’t sufficiently conservative enough. And this is what led Goldberg to accuse these tea partiers of being the real RINOs in the GOP.

“As far as the tea partiers are concerned, anybody to the left of Ted Cruz is a RINO… but you know what? The real RINOs are the real people in the tea party and on the hard right, because they have made it clear over and over again that their allegiance is not to the Republican party, but to their particular brand of conservatism, so they’re the RINOs.”

O’Reilly suggested Cruz, if he ran, could rally the nation behind him if Obamacare continues to be a disaster, but Goldberg said anything short of “horrendously bad” will not be enough to help them. He also warned that if someone like Cruz gets the nomination, “every registered Democrat will vote, and that’s a recipe for a Democratic victory?”