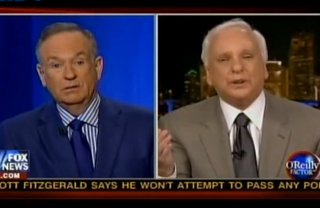 The all-out war between Glenn Beck and George Soros to make Godwin’s Law an official scientifically-accepted principle continued this weekend on CNN, where the billionaire told Fareed Zakaria that Fox News’ “falsehoods” were similar to what succeeded in Weimar Germany. On tonight’s Factor, Bill O’Reilly tried to make sense of Soros’ continued escalation of the feud while regular guest Bernie Goldberg wondered why Zakaria allowed that language to begin with.

Once in a while, O’Reilly said by way of explanation, “Soros comes down from this plush boardroom, or his private jet lands somewhere near CNN headquarters,” and he gives an opinion. This was highly perplexing to O’Reilly, as he didn’t believe Soros was “changing anybody’s mind” by speaking out, nor was he making much business. Goldberg argued that Soros merely spoke out because he believed in what he said. “I think he honest to God believes every syllable of what he said,” he argued, but that, more problematic than Soros’ opinions was the fact that “it takes two to tango,” and “supposed journalist” Zakaria didn’t challenge his propositions on the “American fascist dictatorship” forwarded by Fox News– “Zakaria didn’t ask a single question.”

At this point O’Reilly and Goldberg’s comments flew past each other a good deal, as O’Reilly was fixated with the reasoning behind Soros’ behavior, while Zakaria was far more interesting to Goldberg. O’Reilly argued that many who used similar rhetoric on the right are “in business to do that” and “are making money doing it,” but Soros didn’t need that. “Aren’t there drugs you want to give out for free?” he asked of Soros. Goldberg’s reaction to this was merely that he spoke what he believed to be the truth and Soros, as a private citizen with little influence as a speaker in the media, was not nearly as important as Zakaria in this context. “Zakaria is supposedly a journalist,” Goldberg concluded, “and a journalist just doesn’t sit there like a bump on a log when someone is making crazy statements like that.”