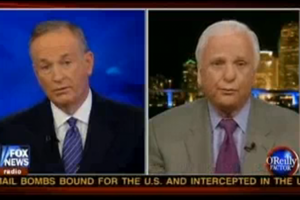 Bernie Goldberg had a lot more on his plate tonight for his regular “Weekdays with Bernie” segment on the O’Reilly Factor with the variety and scope of mainstream media election coverage, but he limited his analysis to two major targets: Dana Milbank and the Washington Post, and the MSNBC Election Day crew– or, as Goldberg put it, “five liberal commentators being snarky [and] giggling like schoolgirls.”

Milbank, long a favorite target of O’Reilly’s, was under the microscope of implying that no liberal commentators were on hand for Fox News’ election coverage in his Washington Post piece today (Milbank, it turns out, was in the minority believing Fox was one of the less objective networks last night). Bill O’Reilly asked Goldberg whether Milbank should be fired for being dishonest, a question which Goldberg seemed to find immaterial, due to the Post‘s “irrational fear of Fox News.” “It’s because of this arrogance that so many people have lost faith with the so-called mainstream media,” he concluded.

As for last night’s election coverage, Goldberg had praise for Fox News and CNN, appreciating their “professional jobs” and comparing their work to MSNBC, which he claimed “jumped the shark.” “They broke the cardinal rule of journalism,” he explained: “you don’t have partisans cover hard news events.” Comparing their coverage to The View and mocking their “schoolgirls,” O’Reilly suggested that “it didn’t have to be that way,” and that having Joe Scarborough on during prime time. Goldberg countered that that would be impossible because “serious journalists don’t want to be anywhere near those people.

Goldberg also took a “shot” at O’Reilly for comparing former Rep. Alan Grayson to criminals– “that’s not fair to the criminals, Bill.”