Bernie Sanders Coverage Focuses on Shallow Details — Much to His Chagrin 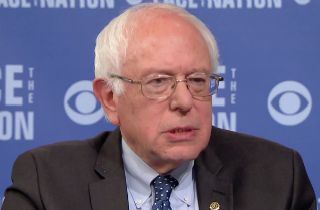 The coverage of the surging Bernie Sanders is a case study in 2015 Media Approach 101. Let’s begin our class with some Q&A, shall we?

Question: Is Sanders getting ample coverage in a general field consisting of 22 candidates?

Answer: Yes. Based on perception, one could argue he’s in the top five in terms of total airtime behind Trump, Clinton, Bush and Fiorina.

Question: What is the lede in almost all of the coverage of the Senator?

Answer: Attendance. Outside of standard Sunday show appearances, Sanders generates a majority of his buzz based on the size of the crowds he draws. And they’re impressive: 27,000 in Los Angeles. 28,000 in Oregon. No other candidate can come close to drawing what the 73-year-old does and the numbers are certainly noteworthy. The rest of the coverage around Bernie either focuses on any criticism of Hillary (which is rare) and his polling numbers…particularly the kind like we saw this week which shows him beating Mrs. Clinton in New Hampshire by seven points…a state she won in 2008.

Question: How often are Sanders’ policy positions–particularly economic–analyzed and broken down in detail?

Answer: Almost never. And that’s the meat of the Media Approach 101 case study that is something to behold: While Bernie’s speeches are covered because of the impressive number of people he attracts, rarely do those reports actually contain any scrutiny of what is being said. Conservative media doesn’t take him very seriously as a candidate who can win the nomination despite the rising poll numbers…because Americans would never nominate a declared socialist (or would they?). So when those on the right mention Bernie, it’s almost lovingly simply due to the fact it’s an embarrassment to the infinitely-better funded candidate with 25 years of name recognition in the form of Hillary. She can’t draw big crowds, can’t seem to get out of her own way with all the self-induced errors. Most Democratic voters even seem to loathe her, but stick around because she’s the only hope to keep the White House (until Joe Biden jumps in as many jump ship like they did in ’08, anyway).

And if Sanders can make her look like the inept candidate she is in the process, all the better. To break down his policy positions on, say, his support to raise the top marginal tax rate to over 50 percent is ignored by conservative media for the reason listed above: It’s more important to make Hillary look bad.

So what does Bernie think of his coverage? About what you’d expect…and it’s hard to argue with the perspective. Per an interview on CNN’s Reliable Sources:

SANDERS: … there is more coverage about the political gossip of a campaign, about raising money, about polling, about somebody saying something dumb, or some kid works for a campaign sends out something stupid on Facebook, right? We can expect that to be a major story. But what your job is, what the media’s job is, is to say, look, these are the major issues facing the country. We’re a democracy. People have different points of view. Let’s argue it.

Ah…but that would mean taking the reality show out of all campaign coverage, and that simply ain’t going to happen. Lost in the hubbub over the Fox GOP Debate and the Trump-Megyn Kelly controversy was the fact there was some quality dialogue around key issues of the day. You can agree or disagree with what you heard, but each candidate was impeccably prepared and acquitted themselves well (especially compared to 2012). Some stood out more than others, of course (paging Scott Walker…), but the only big story that seemed to emerge from that evening focused on the questions Donald Trump received and if they were fair or not. Bernie’s aforementioned analysis couldn’t be any more spot-on.

We in media all want the sound bite. We all want to be entertained. And as voters, we all prefer to root more against the other side instead of for our own horse.

Realty TV meets the campaign trail. Business is booming for those covering it as a result. Doesn’t make it right…

But in a country based on the principle of supply and demand, you can’t really blame corporate media for giving its audience what it’s asking for.