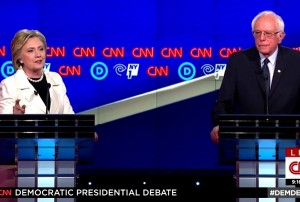 For those of you watching the Democratic presidential primary and wondering just how damaging the “Bernie or Bust” phenomenon could be to Hillary Clinton if she defeats Bernie Sanders to secure the nomination, there were some disturbing signs at Thursday night’s debate. Lost in the media’s obsession with the “tone” of the debate and the closeness of the contest were several hints that Bernie Sanders has no intention of getting his supporters on the Hillary Clinton train should she win.

Ever since Susan Sarandon made biggish news with her own rant about sitting by and letting Donald Trump win if Hillary gets the nomination, the Sanders campaign has been playing footsie with the #BernieOrBust crowd, paying lip service to eventual party unity while winking heavily at the dead-enders. Sure, Hillary’s qualified, if you love being beheaded by ISIS!

At the tail end of the debate Thursday night, Hillary Clinton made a gracious appeal to Sanders supporters, noting that “it is absolutely critical and incredible that we have so many young people involved in the political process. I applaud all of those who are applauding you, Senator Sanders. We’re happy that they are supporting you, that they are passionately committed to you and to the issues,”  and adding “But, let me also say it’s going to be important that we unify the Democratic party when the nomination process has been completed”

Moments later, Hillary explained her path to victory a la Howard Dean, minus the scream, and said that she would “unify” the party for the general election. Immediately thereafter, Bernie conspicuously ignored the “party unity” cues, and instead went off on Hillary again over campaign contributions:

The reason — the reason why in virtually every contest we are winning by very strong margins younger people — and I’m not just talking about very young. You know, the older you get, the younger young gets — 45 or younger — is I think people are sensing that establishment politics and dependence on Wall Street and big money interest is really never going to address the crises that we face. And people understand, you can’t take money from powerful special interests into your PAC and then really expect the American people to believe you’re going to stand up to these powerful special interests.

Nothing in Sanders’ answer would lead any of his supporters to believe they should support Hillary if she’s the nominee, or that Sanders even cares one way or the other. In fact, he appears to care the other way.

After the debate, Bernie had another shot at it when Jeff Zeleny asked him how he planned to unify the party, and Sanders’ answer was equally discomfiting (emphasis mine):

Zeleny: The tone in this debate seemed so different from those early debates last year and earlier this year. Given that tone, how difficult will it be to unify this Democratic Party?

Sanders: …I think, look, to answer your question, there are no Democrats that I know, or virtually none, who will desert the Democratic Party, no matter who wins, to vote for Donald Trump or some other right-wing Republican.

That’s all well and good, Bernie, but nobody’s worried about Susan Sarandon voting for Trump, they’re worried about millions of Berners staying home and sulking with each other via Snapchat or whatever it is millennials do. Nothing in that answer is designed to prevent that. At the tail end of that interview, as Sanders complained that he had a plane to catch, Zeleny took another shot at it:

So, Bernie is just ignoring the “party unity” issue, and just saying that if he wins the nomination, everything will be fine. Nice general election. Be a shame if anything happened to it.