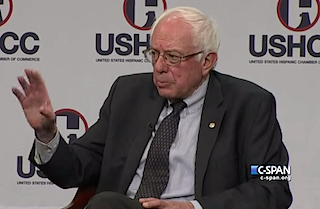 Last week, during one 24-hour period, Donald Trump first said he would “absolutely” consider a third-party run and then reversed course, saying that his “total focus is to run as a Republican and to win.” This question of whether to run as an Independent has also been brought up in relation to Bernie Sanders, who happens to be the only Independent member of the U.S. Senate.

In a Q&A session with the U.S. Hispanic Chamber of Commerce on Thursday, Sanders delivered a definitive “no” when asked if he would run as an Independent were he to lose the Democratic primary to Hillary Clinton.

Sanders explained that when he was making his decision to run for president in 2016, he considered doing it as an Independent because he feels the Democratic Party is “too conservative, too cozied up with big money and corporate America.” But ultimately he decided that the “only way” to run for president “at this unique moment in history” would be to do it as part of the two-party system.

“If it happens that I do not win that process, would I run outside of the system? No, I made the promise that I would not and I will keep that promise,” Sanders said. “And the reason for that is I do not want to be responsible for electing some right-wing Republican to be president of the United States.”

In other words, Sanders does not want to be the Ralph Nader of 2016. Trump, on the other hand, has only said that he “wants” to run as Republican, leaving the door far more open to a potential third-party run that would all but deliver the election to the Democratic candidate.