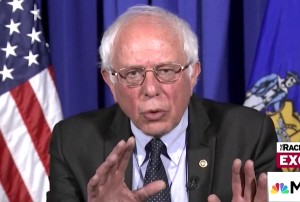 It’s the kind of question that only the squishiest of overthinking bleeding-heart liberals could love: shouldn’t we all feel some compassion for the Republican Party’s current struggles, and hope they work it all out? That’s the question that Rachel Maddow posed to Hillary Clinton Wednesday night, eliciting a predictably diplomatic, make-nice response. When she later posed the question to Bernie Sanders, he first went on a verbal stroll around the question, but on re-direct, made his feelings refreshingly clear:

Sanders: What you really need in this country is a progressive party standing with the working class and the middle class of this country. And yes, a conservative party that, you know, has, you know, is more fiscally conservative. That is where we should be as a country. But the Republican Party today now is a joke, maintained by a media which really does not force them to discuss their issues. So that — that’s my two cents on that.

Maddow: Well, if the — let me try to get three cents out of you on that. If they’re a — a fringe party and a joke and they’re no longer the conservative party that they appear to be, they’re being propped up by a media that doesn’t call them on what it is they’re actually offering, does that mean that you would applaud if the Republican Party really did blow up? I mean some people say that the nomination of Donald Trump and the process they’re going through now by which they — they might nominate him is enough to maybe destroy that party, maybe end the Republican Party. Do you think that would — that would be a good thing?

Sanders: Well, I’m not going to give the Republican leadership, you know, really any ideas on how they can reorganize their party. All I can tell you is that it is absolutely imperative for the future of this country and for future generations that we do not have a Republican in the White House, whether it is Trump or Cruz or anybody else.

You hear this sort of concern-trolling from mainstream media liberals all the time, the idea that you need two strong parties, and therefore we should all hope the Republicans sort themselves out, but while what Bernie described in the first part of his answer was spot-on, we already have that. It’s called the Democratic Party.

I’m the first to agree that there needs to be a check on unfettered liberalism, but that doesn’t need to come along with heaps of racism and religious repression. The Republicans didn’t keep the public option out of the Affordable Care Act, Democrats did. There’s plenty of conservatism to go around in the Democratic Party, so if the Republican Party does blow up, let them join up with the conservadems and stop pretending they care about all the goofy cultural crap they have to keep up with now, and concentrate on what really matters to them.