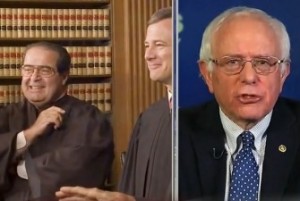 The death of Supreme Court Justice Antonin Scalia prompted an unseemly rush into politics Saturday afternoon when Senate Majority Leader Mitch McConnell couldn’t wait five seconds to wage political war over it, even as the other side of the political aisle tried to be as gracious as possible about the passing of a conservative justice whose record left little for which to applaud. There was one liberal politician, though, who crossed the line from diplomatic remembrance to something approaching substantive praise.

It has always been my personal policy to do my best to refrain from speaking ill of the dead, even on a substantive basis, for at least a day or two following an untimely death, and if possible, to find something nice to say. In Justice Scalia’s case, I recounted my lone meeting with him, at 2013’s White House Correspondents’ Dinner, where he was gracious, generous with his time, and a personally delightful person. He was probably the nicest of the hundreds of people I met that night.

He was a gentleman, extraordinarily gracious when we met, WHCD 2013 #RIPJusticeScalia pic.twitter.com/N9ys9yZH5c

As for his record and legacy, those were better left unsaid. Other diametrically opposed leaders found their own diplomatic ways of complimenting Scalia without really complimenting his work. President Obama mostly stuck with personal details, but called him “one of the most consequential judges and thinkers to serve on the Supreme Court,” which sounds good until you realize that Bill Buckner was one of the most “consequential” first basemen in Red Sox history.

Similarly, Hillary Clinton said that Scalia was “a dedicated public servant who brought energy and passion to the bench,” which could also partially describe Bill Buckner.

Then there was Bernie Sanders, who, in an interview on this week’s Fox News Sunday, told Chris Wallace that he had “respect” for Scalia’s service to his country:

WALLACE: You disagreed with Justice Scalia on a judicial basis, not a personal basis, on almost every issue. What do you think his legacy is, sir?

There are many things to respect about Justice Scalia. As President Obama said, the man had a stellar intellect, and it would be impossible to deny his skill in an argument. The affection that those who knew him personally had for him was borne out in my brief meeting with him, and his professional accomplishments are literally impossible to surpass: he was a member of the Supreme Court.

But to respect his service to our country is to acknowledge that Justice Scalia ever did a service to his country, when his actual record as a Supreme Court justice is toxic to anyone who cares about the things that make this country great. Did Sanders respect the service Scalia did when he argued that black students might be better off going to a “slower-track school where they do well,” a remark that even shocked Donald Trump?

Was it the great service Scalia did when he helped the court gut the Voting Rights Act, which he chalked up to “perpetuation of racial entitlement?” Was it his inconsistent dissent on the Defense of Marriage Act, in which he railed against overturning the will of the duly-elected legislature just days after overturning the Voting Rights Act that was passed by the duly-elected legislature?

I wish that Antonin Scalia were still alive today. I wish he’d continued to live a long life, long enough to perhaps learn how wrong he had been, or long enough to retire from the bench and live out his days entertaining white people at cocktail parties with “provocative” conversation and impish charm. Either of those things would have been a service to his country that I could respect.