Bernstein Whips Media for Blaming Both Parties for Shutdown: ‘There are Facts Here’
VIDEO

Bernstein Whips Media for Blaming Both Parties for Shutdown: ‘There are Facts Here’ 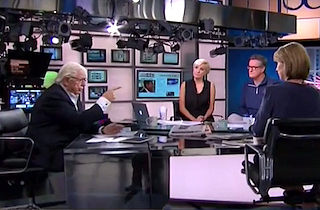 Journalist Carl Bernstein chided the media for its false equivalency narrative of the government shutdown on Morning Joe Tuesday morning, arguing that the GOP’s “nihilism” was driving destructive, anti-governing policies.

“This is about media,” Bernstein said. “These poll numbers are about a totally different media culture than we’ve had in the past…We need to start covering this story not 50/50, this much on this side, that on the other. We need to cover it factually, because there are facts here that will show what this event is about, and where, in fact, is this anger, hatred of Obama coming from, what is the root of this.”

“We’re at a great cultural moment, a great political, pivotal moment in our history,” Bernstein said. “I compared it last to week to Joe McCarthy. This is about the Republican Party and what it’s going to be. Is it going to conduct a fact-based, philosophical argument in our political system, or is it going to be a nihilistic, hateful asymmetrical, in terms of facts and the truth, part of the party, as in Joe McCarthy?”

RELATED: Kristol to Carl Bernstein: FDR ‘Rolling Over in His Grave’ for Being Compared to Obama

Former George W Bush communications director regular Nicolle Wallace, instructed by Scarborough to play the “Kristol role” this week, actually built off Bernstein’s point, arguing that the GOP was ideologically unified but paralyzed by a dispute over methods and motives.

“That’s why I called them nihilists!” Bernstein said.