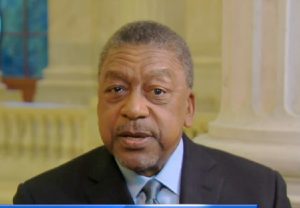 In an appearance on CNBC’s Squawk Box this morning, BET founder Bob Johnson remarked that he didn’t feel President-elect Donald Trump was a racist. He also noted that in a meeting with Trump after Election Day, the incoming POTUS offered him a spot in his administration.

According to Johnson, while he went in not thinking it was a job interview, he was presented with a position regardless. However, he declined because he doesn’t want to be part of government.

“It was an easy discussion, because I wasn’t coming there on a job interview,” Johnson noted. “He hinted at something I could be interested in, and I quickly shut that down. It was a cabinet position.”

“But I can’t work for the government,” the RLJ Companies chairman stated. “Because to me as an entrepreneur trying to work in a government structure where you got to through 15 different layers of decision-making to get want you want done doesn’t fit my mold.”

Johnson also commented about whether or not he felt Trump was racist, a constant criticism that has been lobbed at the real estate mogul.

“To me, I never thought Donald Trump, and I still don’t believe it today, was a racist. I don’t believe that he’s anti-African-American,” he explained.

Watch the interview above, via CNBC.