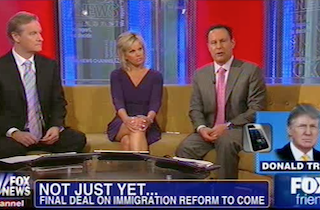 It’s Monday, kids: The day Donald Trump phones in to Fox & Friends to chat about the news and, well, himself. Today was no exception, as Trump chimed in on immigration and increased spending on infrastructure. In a bit of a change of pace, he urge Republicans to be “careful” on the former, while agreeing with President Obama that we need to invest in our country, which is “falling apart.”

The Republicans are in a “box,” Trump asserted, trying to find their way out — and “they’re going to make it possible for 11 million or 12 million illegals to become citizens. And I always warn them…every single one of those 12 million people will be voting against the Republicans.” They’re “going to the Democrats no matter what they do, no matter how far out in front they are, it makes absolutely no difference.”

Continuing with the criticism, Trump said while our southern border isn’t secure, our figurative border with Europe does appear to be, given that those who file paperwork to come here legally are unable to. Again, he heeded a warning to the GOP.

“If you come from certain parts of the world and you want to become a great productive, wonderful citizen of this country, it’s virtually impossible,” he asserted. “Now, if you’re an illegal and you’re here, they’re trying to find a pathway to citizenship. I can say this, the Republicans better be careful.”

On the flip side, when the segment turned to infrastructure spending, Trump said it’s necessary. “Our country is falling apart,” he argued. “We’re building roads in Afghanistan and schools in Afghanistan. They blow up the school, and we build another one. But we can’t build a school in Brooklyn, New York.”