Between GOP Debate and Stewart Finale, Get Ready for Greatest Night of Political TV

Between GOP Debate and Stewart Finale, Get Ready for Greatest Night of Political TV 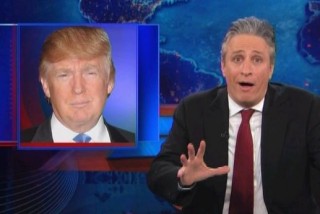 Thursday night may be the greatest night in the history of political television.

And the best part? It’s happening in the least-watched month of the year.

We’re talking about, of course, the most anticipated primary debate ever going down on Fox News from Cleveland between the top ten candidates on the GOP side. Captain Obvious says Donald Trump will be the focal point, as he has been over the last month in dominating the news cycle like no candidate has since candidate Obama burst onto the scene in 2007…and the delicate dance the other nine candidates will attempt in going after the frontrunner while avoiding not making the evening all about him will be very essence of entertainment. And when it’s all said and done, this will be–and we’re talking easily–the most-watched cable news scheduled event of all-time…and that includes past election night coverage.

Immediately afterward, each of the cable news networks will provide the usual postgame analysis. But on another kind of network and another kind of program that covers this stuff in its own special way, the focus won’t be on Trump, but on Jon Stewart as he says goodbye to The Daily Show after an amazing 16 years as its host. Say what you will about Stewart the person and his ideology, Stewart the host nails it every night. The writing by Stewart’s team superb, the delivery and timing by the host a marvel. The guest list will be extraordinary. It’s a shame Stewart isn’t staying on one more week just to break down the debate for that reason alone, but this is a date long decided on before GOP brass picked the same evening.

Back to said debate, it even has built-in anticipation not unlike the NCAA Tournament Selection show. The top 8 candidates (Trump, Walker, Bush, Rubio, Cruz, Carson, Huckabee, Paul) are set. But there’s two spots that three candidates running neck-and-neck are vying for (bubble teams). Will John Kasich be on the stage in his own state? (he will, book it). Will Rick Perry and all potential for unintentional comedy be there (nope…going the wrong direction). Will Chris Christie–who used to own bull-in-the-china-shop-status before Trump came along–make the cut? We’ll see (probably). However it shapes up, we’ve never seen anything like this before, and the unpredictably of the entire event will power the news cycle this week and beyond.

August 6. Usually a random Thursday in the middle of summer when the last thing Americans are doing is staying in watching TV.

But between a GOP debate with Donald Trump — the bombastic billionaire frontrunner with the bullseye on him — and Jon Stewart signing off for the final time on Comedy Central, you really won’t find a better night for political theater and entertainment in a long, long time.