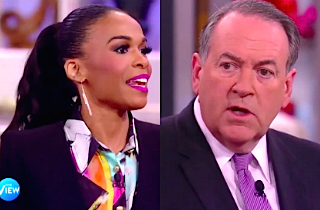 Mike Huckabee visited The View on Thursday morning where Michelle Williams, of Destiny’s Child fame, just happened to be sitting in as a guest co-host. So naturally she had a few things to say to the former Arkansas governor when the subject of Beyoncé came up.

“She’s amazing!” Williams said right off the bat of her former groupmate and childhood friend.

“She is amazing and interestingly, I’ve had so much uproar over half a page in my book,” Huckabee said of the passage from God, Guns, Grits, and Gravy

in which he essentially calls the singer a prostitute. In subsequent interviews he castigated President Barack Obama for allowing his children to listen to her supposedly scandalous music.

“I say she’s the most amazing singer, great set of pipes, unbelievable dancer and she doesn’t need to do songs like ‘Partition’ and ‘Drunk in Love’ in order to be an effective and an amazing talent,” he continued. “Because she’s such a role model for so many young women and this is what I said and it was a simple half a page in a 270-page book, and I’m thinking, my gosh, that’s all I’ve heard about this week.”

Huckabee neglected to mention the part where he wrote of Beyoncé’s husband, “Jay-Z is a very shrewd businessman, but I wonder: Does it occur to him that he is arguably crossing the line from husband to pimp by exploiting his wife as a sex object?”

“You definitely can’t mess with her,” Williams chimed in. “But as someone who has definitely come up in a group with her, has seen her hard work and who she is, I just feel like, you know, that album and those songs is that one moment where she decided to probably do some songs she’s always wanted to do to shed that ‘I’m a good girl.’ She had some freedom and she owned it and she took it, so I was definitely offended. I’m not the Carter spokesperson, but to hear some of those comments that you said I thought were very, very, very low.”

“I respect you and this is not to throw mud and tomatoes and all that stuff,” she added.

Huckabee insisted that it’s the headlines and stories from reporters about his comments and not what he actually wrote in the book that have offended so many people. “I’ve said to people, read it and if you’re still offended, so be it,” he said.

Again, here is the passage about Beyoncé directly from Huckabee’s book:

My reaction: Why? Beyonce is incredibly talented – gifted, in fact. She has an exceptional set of pipes and can actually sing. She is a terrific dancer – without the explicit moves best left for the privacy of her bedroom. Jay-Z is a very shrewd businessman, but I wonder: Does it occur to him that he is arguably crossing the line from husband to pimp by exploiting his wife as a sex object?