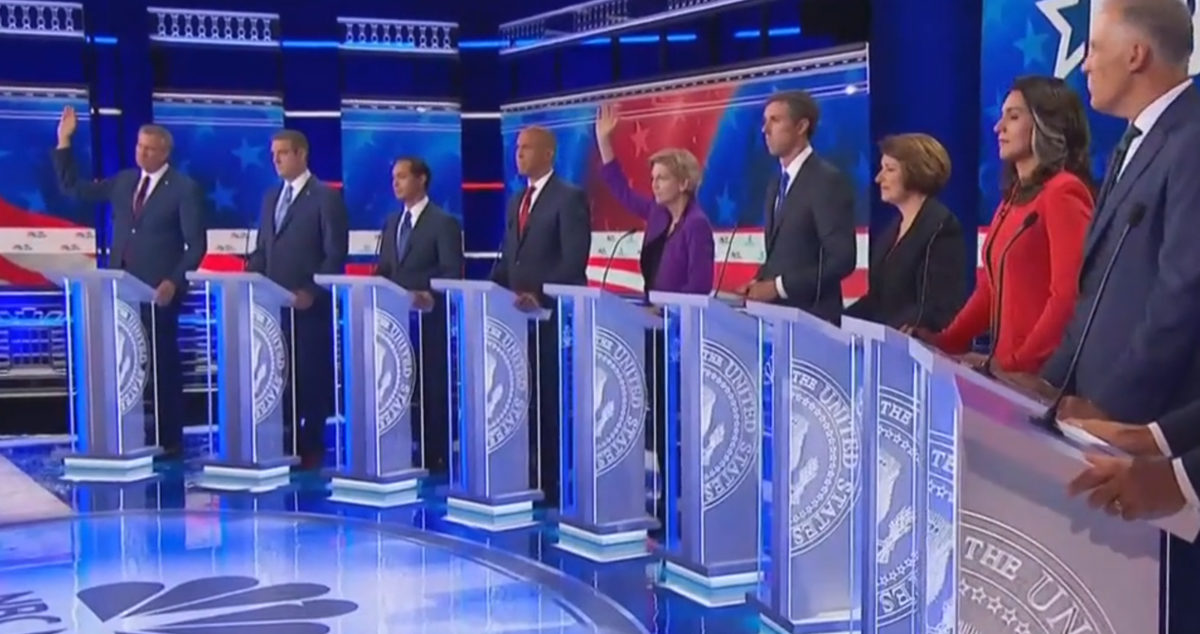 The audio technical difficulties from Wednesday night’s debate may have gotten the headlines (and the Trump trolling tweet) but there were other issues that kept NBC News’ overall production tethered to the ground.

The kindest thing one could reasonably say about NBC News’ presentation of the first 2020 Democratic debate Wednesday night is that the cards were stacked against them. Featuring 10 candidates — many of whom were nearly unrecognizable to a non-politically obsessed citizen — combined with the fact that it was the first debate production in over three years, proved to be tough challenges to surmount.

First, however, some praise. Rachel Maddow proved herself to be a completely capable debate moderator, effectively dismissing conservative critics taking issue with an opinion show host as debate moderator. Not only did she keep her allied point of view in check, but she effectively pushed back on candidates who wantonly ignored time constraints. She and her partnered moderator Chuck Todd even handled the hot mic issue with humor that released the tension of a very awkward moment.

Where Maddow showed off her talent, Todd did not have his best night. According to a FiveThirtyEight report that tracked total time speaking, Todd came in the fourth amongst all other moderators and featured candidates. That’s not the sign of pithy and pointed questions (though part of that was certainly due to his handling of the audio issues and reasking the question post-commercial break.)

About that tech snafu. It was a tough break that appeared to be a very simple production management error in which the first set of moderators mics were left hot and were picking up latent audio that was remarkably distracting to viewers and moderators alike. Mistakes happen, and that’s part of the excitement and fun of watching live broadcasts. In hindsight, NBC News should feel very lucky that the hot mics didn’t pick up something more embarrassing, as one is reminded of Detective Frank Drummond of Naked Gun fame and his trip to the bathroom mid-speech.

But there were other significant issues in Wednesday’s debate. Having to feature 10 candidates meant that each candidate was limited to what seemed a ridiculously short amount of time to answer. This led to far too many reminders of “your time is up” from the moderators understandably trying to keep the debate train on time. And let’s not blame NBC for that, that goes to the DNC’s decision to feature so many candidates in one event.

The limited time also led to under-known candidates that they were so eager (desperate?) to make their points and connect with viewers (and potential donors) that they not only went long but often flouted the debate rules and just interjected. One of the most annoying tics of this tightly timed debate? A bizarre impulse from candidates to shout over moderators after their time is declared up. NYC Mayor Bill de Blasio seemed to be the biggest offender, but oddly the candidate interjections provided the conflict that was so sorely missing from a rather staid debate.

The questions offered to the candidates also seemed to be vanilla-flavored. As New York Times White House reporter and CNN contributor, Maggie Haberman note on CNN’s New Day, she was surprised that certain questions didn’t get asked of particular candidates. She then cited Tulsi Gabbard not being challenged on her controversial comments with Syrian leader Bashar al Assad, or Elizabeth Warren not being challenged on her DNA test. Haberman eventually damned with faint praise by saying “I think this was a debate designed to avoid a lot of media criticism and I think they succeeded in that.”

NBC cannot be blamed entirely for the questioning, as they clearly were created in collaboration with the DNC. Avoiding conflict isn’t necessarily the worst goal so early in the process. NBC can take responsibility for the odd choice of rotating moderators, which made an already disjointed program feel bumpy just when it was starting to feel smooth.

And of course, there was the overall production value that seemed lacking. Not just the audio mistakes, but there were also occasional black screens that would interrupt the visuals for blips throughout the broadcast. This may seem like nitpicking, but the overall direction seemed jumpy and not at all self-assured. It was if the director in the truck couldn’t decide on a way-too-tight and unstable single shot of the candidate speaking, or a panning shot of all candidates on stage.

Look, it was the first debate of what will be a long primary season. And I suspect that tonight’s version will be much improved in terms of technical and production value. But in much the same way it wasn’t Beto O’Rourke’s night Wednesday night, nor was it NBC News’.