Biden: Public Agrees ‘Between 51 and 70%’ with Obama ‘on Every Major Issue’
video

Biden: Public Agrees ‘Between 51 and 70%’ with Obama ‘on Every Major Issue’ 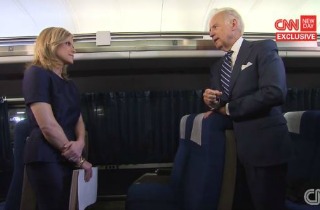 CNN’s Kate Bolduan recently spoke with Vice President Joe Biden on a range of issues relating to politics and his personal career. Biden revealed to the CNN reporter when he believes it would be appropriate to announce a run for president, and why he is more likely to run than not. The vice president also told Bolduan that he is confident about Democrats’ chances ahead of the 2014 midterms because a specific majority of Americans agree with President Barack Obama “on every major issue.”

Biden recently joked to a crowd of union members that the only reason why he would not run for president would be to spend more time with his Corvette. When Bolduan asked if he could think of a serious reason not to run, Biden said, “I can’t.”

“There may be reasons I don’t run, but there’s no obvious reason for me why I think I should not run,” he added. The vice president said that a firm decision on whether to run or not would come “realistically, a year this summer.”

Earlier, Bolduan asked Biden about reports which indicate the president said he is aware campaigning with some Democratic senators would not be constructive because he is unpopular in a number of states and districts where vulnerable Democrats are seeking reelection. Biden told Bolduan that this is not universally true, but he is “truly optimistic” about the midterms.

“On every major issue, the public agrees between 51 and 70 percent with the position taken by the president of the United States and the Democratic Party,” Biden said.

“You give me a chance to have all the issues my way or have popularity at the moment, I’ll take the issues,” he added. “In terms of the prospects of Democrats running for Congress, incumbents in the Senate, I think we are in the best shape we can be.”