Biden Delivers Fiery ISIS Remarks: We Will ‘Follow Them to the Gates of Hell!’ 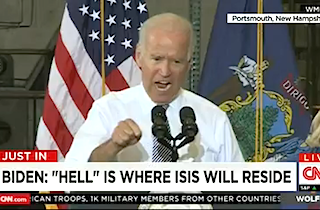 For those Americans looking for an angrier, more impassioned response to the deaths of American journalists James Foley and Steven Sotloff than President Barack Obama was able to provide, look no further than Vice President Joe Biden. Speaking at an event in Portsmouth, New Hampshire Wednesday, Biden drew cheers from the crowd by declaring that the U.S. will follow ISIS fighters to the “gates of hell.”

“The American people are so much stronger, so much more resolved, than any enemy can fully understand,” Biden said. “As a nation, we’re united. And when people harm Americans, we don’t retreat, we don’t forget. We take care of those who are grieving and when that’s finished, they should know, we will follow them to the gates of hell until they are brought to justice.”

This is not the first time Biden has used the “gates of hell” rhetoric against an enemy of America. During the 2012 presidential campaign, nearly one year after Osama bin Laden was killed by U.S. forces in Pakistan, the vice president criticized Republican candidate Mitt Romney for saying in 2007 that it was “not worth moving heaven and earth spending billions of dollars just trying to catch one person.”

“I was a little more direct,” Biden said at the time. “We will follow the SOB to the gates of hell.”