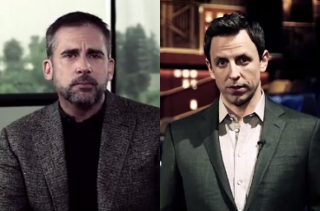 President Barack Obama and Vice President Joe Biden have enlisted some big names for their campaign against sexual assault. In a new PSA posted to The White House’s YouTube channel this week, Daniel Craig, Benicio Del Toro, Dulé Hill, Seth Meyers and Steve Carell join Obama and Biden in saying one case of sexual assault is too many.

By casting this crew of men, The White House is putting a male face on an issue that will only be solved if men take action to change it. “If she doesn’t consent, or if she can’t consent, it’s rape, it’s assault,” Del Toro says into the camera.

Beyond that, they charge their fellow men who speaking up and doing something if they say sexual assault happening at their colleges or in their communities. “It’s up to all of us to put an end to sexual assault,” Obama says. “And that starts with you.”

In addition to the star-studded PSA, Vice President Biden has created the White House Task Force to Protect Students from Sexual Assault that will work to make colleges more accountable for violence against students on their campuses.