Biden Rips Gun Control Opponents On MSNBC, Says Many Like Owning Guns Because ‘It’s Like Driving A Ferrari’
video

Biden Rips Gun Control Opponents On MSNBC, Says Many Like Owning Guns Because ‘It’s Like Driving A Ferrari’ 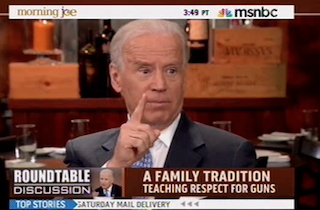 Vice President Joe Biden participated in a roundtable discussion about gun control on Morning Joe2, which aired this morning. Making the argument the Obama administration has been promoting for some time now, the vice president criticized gun control opponents for spreading “disinformation” and “paranoia” — also commenting on a sub-section of gun owners who just like how a gun “feels.”

“This is one of the cases where the public is so far ahead of the elected officials, I mean so far ahead,” Biden asserted. “You saw it in immigration, you saw it in marriage issues, you’re seeing it now. The public has moved to a different place.”

Noting “there is a paranoia out there,” the vice president further called out the NRA, arguing that the one thing they’ve done well recently is spreading “disinformation.” The discussion also stretched into the debate surrounding the constitutionality of some gun control measures, which Biden dismissed as even being a legitimate issue, explaining, “You’re allowed to deny certain weapons and certain bullets.”

Later in the segment, Biden touched upon his own experience with guns, recalling his father’s gun collection. To that point, he noted that the debate surrounding guns used to deal almost exclusively with hunters. But now we have a group of non-hunting gun owners.

“There is a whole new sort of group of individuals now…that never hunt at all,” Biden said. “But they own guns for one of two reasons — self-protection, or they just like the feel of that AR-15 at the range.”

“They like the way it feels,” he added. “It’s like driving a Ferrari, you know. And so my impression is there’s not the same sort of cultural norm about gun ownership with a lot of people who are buying guns now.”