Joe Biden Vs. Dick Cheney? More Like Meet The Press Vs This Week – Update 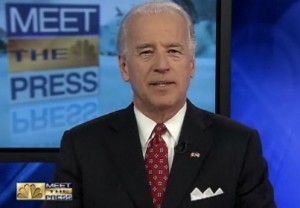 Its the battle of Vice Presidents, past versus present, and NBC’s Meet the Press vs. ABC’s This Week. Vice President Joe Biden was a guest on MTP this morning, and fired the first salvos towards former Vice President Dick Cheney, who has been a vocal critic of the Obama administration, particularly with regards the handling of the Christmas Day Bomber and the trying of Khalid Sheikh Mohammed. Biden said “Dick Cheney’s a fine fellow. He’s entitled to his own opinion. He’s not entitled to rewrite history.” We can expect Cheney’s response, and perhaps further attacks, during his appearance this morning on ABC’s This Week.
Huffington Post sets up the back and forth thusly:

Asked to respond to a range of harsh attacks on the Obama administration leveled by Cheney, Biden first gathered himself. “Let me choose my words carefully here,” he told David Gregory in a pre-taped interview for Sunday’s “Meet the Press.”

Then Biden let loose with several minutes of his most pointed criticism of Cheney since the 2008 presidential campaign, when Biden claimed that Cheney had “done more harm than any other single elected official in memory in terms of shredding the Constitution.”

Speaking to Gregory, Biden charged at least four times that Cheney was “rewrit[ing] history” with his recent attacks, and declared that President Obama has amassed a success rate in countering terrorism that “exceeds anything that occurred in the last Administration.”

ABC’s The Note has excerpts from Dick Cheney’s interview with This Week:

Former Vice President Dick Cheney lashed out at Vice President Biden’s assertion that another 9/11-style attack is unlikely. In an exclusive interview on “This Week,” he called Biden’s view “dead wrong.”

“I think, in fact, the situation with respect to Al Qaeda, to say, you know, that was big attack we had on 9/11 but it’s not likely again – I just think that’s just dead wrong,” Cheney said.

“I think the biggest strategic threat the United States faces today is the possibility of another 9/11 with a nuclear weapon or a biological agent of some kind. And I think Al Qaeda is out there – even as we meet – trying to do that,” Cheney said to ABC’s Jonathan Karl.

Hey – wouldn’t it be great if Biden and Cheney agreed to be on the same program so that they could debate with one another directly? Instead, they choose their own Sunday morning platform that will not allow for direct attacks from political foes. I’ll say it – wimps.

DAVID GREGORY: Let me ask you about some of the criticism that’s been leveled at this Administration by former Vice President Dick Cheney. He has argued that this Administration has failed to treat the fight against terrorists as war. He cites the decision related to Khalid Sheik Muhammad to offer him a civilian trail as one example. Giving the Christmas Day Bomber the privileges of the American criminal justice system is another example. The decision to shut down the Guantanamo Bay prison. What do you say?

VICE PRESIDENT JOE BIDEN: Let me choose my words carefully here. Dick Cheney’s a fine fellow. He’s entitled to his own opinion. He’s not entitled to rewrite history. He’s not entitled to his own facts. The Christmas Day Bomber was treated the exact way that he suggested that the Shoe Bomber was treated. Absolutely the same way. Under the Bush Administration there were three trials in military courts. Two of those people are now walking the streets. They are free. There were 300 trials of so-called terrorists and those who engage in terror against the United States of America who are in federal prison and have not seen the light of day. Prosecuted under the last Administration. Dick Cheney’s a fine fellow, but he is not entitled to rewrite history without it being challenged. I don’t know where he has been. Where was he the last four years of the last Administration?

DAVID GREGORY: What about the general proposition that the President according to former Vice President Cheney doesn’t consider America to be at war and is essentially soft on terrorism? What do you say about that?

VICE PRESIDENT JOE BIDEN: I don’t think the Vice– the Former Vice President Dick Cheney listens. The President of the United States said in the State of the Union, “We’re at war with Al Qaeda.” He stated this– and by the way, we’re pursuing that war with a vigor like it’s never been seen before. We’ve eliminated 12 of their top 20 people. We have taken out 100 of their associates. We are making, we’ve sent them underground. They are in fact not able to do anything remotely like they were in the past. They are on the run. I don’t know where Dick Cheney has been. Look, it’s one thing, again, to– to criticize. It’s another thing to sort of rewrite history. What is he talking about?

DAVID GREGORY: You have often said, when I’ve asked you and others, that you never impugn a man’s motives. But why do you think Dick Cheney is speaking out and being so critical of the President and the Administration so publicly?

VICE PRESIDENT JOE BIDEN: I don’t know. I– I– I’m not gonna guess about his motive. All I know is he’s factually, substantively wrong. On the major criticisms he is asserting. Why he’s insisting on that. He either is misinformed or he is misinforming. But the facts are that his assertions are not accurate.

DAVID GREGORY: You would not be this outspoken or critical when you’re out of office. Is that fair to say?

VICE PRESIDENT JOE BIDEN: Well, I– I– I would hope I– look, it’s one thing to be outspoken. It’s another thing to be outspoken in a way that misrepresents the facts. And I– I guess– again, I– it’s almost like Dick is trying to rewrite history. I can understand where the– why that would be– you know, an impulse. And maybe he isn’t– literally, I’m not being facetious. Maybe he’s not fully informed of what’s going on. I mean, the progress we have made. There has never been as much emphasis and resources brought against Al Qaeda. The success rate exceeds anything that occurred in the last Administration. And they did their best. I’m not– I’m not impugning their effort. It’s simply not true that the President of the United States is not prosecuting the war against Al Qaeda with a vigor that’s never been seen before. It’s real. It’s deep. It’s successful.

And here’s video of Cheney speaking on Joe Biden on ABC’s This Week: