Biden: ‘We Rolled Up Our Sleeves, Our Pant Legs, We Were In Our Gym Shorts’ To Get Jobs Bill Passed 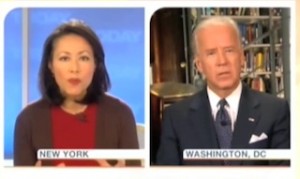 In a heated interview, Vice President Joe Biden spoke with Today‘s Ann Curry today on the defeat of the jobs bill in the Senate. “The president’s jobs bill didn’t even get unanimous vote from Senate Democrats. Why didn’t the president roll up his sleeves months ago and line by line address this issue for the need for jobs to create a bill that both parties could support?” Curry asked. “Hey, he not only rolled up his sleeves; we rolled up our sleeves, our pant legs, we were in our gym shorts working like the devil. They’ve made it real clear that under no circumstances are they prepared to pay for anything that we need to do now so we don’t raise the debt further in order to help people have jobs.”

“But you didn’t finalize a bill, Mr. Vice President,” Curry countered. “No. Hey! There’s no way to finalize a bill,” Biden replied. “It’s very clear these guys have no intention. When we put this bill together, we put together elements of a bill that they had always supported. When have Republicans been against tax cuts for small businesses? When have they been against working on infrastructure? When have they been against giving veterans a break? We put this bill after hundreds of hours of negotiations on debt and many other things with the Republicans the last two years.”

Curry followed up Biden’s response by pointing to the economic suffering in the country, and asking if there wasn’t a “moral obligation” for President Obama and the Republicans in Congress to come to some kind of agreement on jobs before the next election.

“Absolutely, positively Ann!” exclaimed Biden. “We have done everything. we bent over backwards. we had basically a deal on cutting the debt. they could not sell it to their own members. they made it clear under no circumstances are they prepared to pay for anything that we need to do now, so we don’t raise the debt further, in order to help people to have jobs. This is crazy!”

Curry finished the interview by provocatively asking if Biden would be replaced as the Vice Presidential nominee on the Democratic ticket.

“There’s never been a question about that,” Biden chuckled. “The president’s made that clear and hardly anybody is raising it anymore. I guess it’s parlor game talk but the parlor is even bare down here now.”

Watch the Vice President’s interview below via NBC: