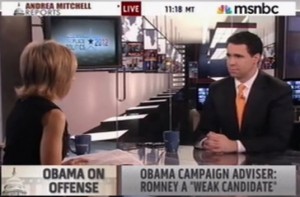 In an appearance on Andrea Mitchell Reports, former White House spokesman and Priorities USA Action co-founder Bill Burton was asked to respond to the suggestion that his SuperPAC should return the $1 million donation from Bill Maher, in light of the Rush Limbaugh controversy. Burton denounced Maher’s remarks as “vulgar and inappropriate,” but rejected the comparison of Maher’s remarks about Sarah Palin to Limbaugh’s verbal assault on student and activist Sandra Fluke.

Anchor Andrea Mitchell asked Burton “There’s been a suggestion that you should return the $1 million contribution from Bill Maher, that if you’re going to — if liberals are going to go after Rush Limbaugh for the outrageous things that he’s said about sandra fluke, that you should return the contribution from Bill Maher because of things that he has said about Sarah Palin.”

“Well, a couple of things,” Burton began. “First of all, obviously, some of those things were vulgar and inappropriate, and said over the course of years of a comedian’s life. It’s not language I would use, or language we would use at Priorities USA.”

Mitchell interrupted, “Isn’t that what Mitt Romney said over Rush Limbaugh’s language? ‘Not language that I would use.'”

“Well, the notion that there is an equivalence between what a comedian has said during the course of his career, and what the de facto leader of the Republican Party said to sexually degrade a woman who engaged in a political debate of our time is crazy. There’s no similarity about what Rush Limbaugh said, lying about the argument that Miss Fluke was making, a law student at Georgetown, and what a comedian has said in the past.”

“And finally, if we want to have this debate where we’re stacking up what supporters of candidates have said over time, Mitt Romney begged Ted Nugent for his endorsement, and he gave it to him, and he embraced it and his campaign was bragging about it. But you look at some of the things he’s said.”

“But this is all distraction from the fact that there are real differences in this race between Mitt Romney and President Obama on key issues. And that’s what’s important here. Where do they stand on contraception? What kind of Supreme Court justice is Mitt Romney going to put in place? An Antonin Scalia or an Elena Kagan? That’s the thing that’s important here.”

Burton’s response is similar to other liberals’ responses to the Maher deflection by Limbaugh’s supporters, a deflection which, valid or not, would not be possible if Maher had been properly held to account when he made his indefensible remarks about Palin.

It’s also worth noting that, while Burton rejected the equivalence, he never did get around to telling Mitchell whether the SuperPAC would be returning the donation.

White House Press Secretary Jay Carney was also asked about Maher’s remarks this afternoon, and without addressing the donation (campaign finance laws prohibit coordination between the President and SuperPACs), responded that “language that denigrates women is inappropriate.”