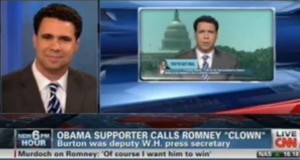 As he later explained to CNN’s Wolf Blitzer, however, he wasn’t calling Mitt Romney a “clown,” he was making the point that Romney is a “formidable candidate.”

While discussing the President’s weekend conference call to donors, Priorities USA Action co-founder Burton told Now host Alex Wagner that “a large number of the folks who support President Obama but have been sitting on the sidelines, they look at Mitt Romney and say, ‘Yeah, but is this clown really going to beat President Obama?’ and the answer is well, maybe, if he has four or five times as much money as the president, then yes.”

The remark got a lot of attention, unfortunately obscuring the really funny observation that Bill made later in the segment, about supposed zillionaire Donald Trump only kicking in $100,000:

CNN’s Wolf Blitzer apparently really hates it when people call each other names, because this afternoon, he hammered Burton for several minutes over the comment, even though Bill repeatedly explained that he was actually calling Romney a “formidable candidate.”

“You’re calling Mitt Romney a clown,” Blitzer scolded. “You can disagree with his policies, you might not like what he’s doing. But to call him a clown, the Republican presidential nominee?”

“You look at the words, take a step back — look at the sentence before,” Burton began. “I say this is what you hear from some Democrats.”

“You weren’t calling him a clown?” Blitzer interjected.

“The whole point of me saying that is, people need to wake up and realize he is a formidable opponent of President Obama’s,” Burton continued, “and he is going to outspend the President and the SuperPACs will outspend the President and, yes, he could win. I’m not into name calling. You can take a step back and look at Mitt Romney and say here’s a guy that made millions of dollars firing people and driving companies out of business.”

In a bizarre cable news remake of Goodfellas, Wolf Blitzer then asked Burton, a full three more times, if he was calling Mitt Romney a clown, to which Bill ultimately responded, “I invite people to take a look at the video. Of course not, I wasn’t calling him a clown.”

This should put the issue to rest for outraged Mitt Romney supporters, notwithstanding Burton’s constant grin throughout the segment, or the fact that panelist Ryan Lizza literally winked at Burton as he told him “You used to call me up, and I’d say ‘I’m just reporting what someone called Obama, I’m not saying it myself.”

For what it’s worth, until Burton explained himself, I took his comment to mean that Mitt Romney isn’t just any clown, he’s an extremely well-funded clown. Glad he cleared the whole thing up.