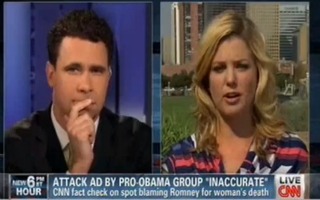 Bill Burton, the former White House Deputy Press Secretary and advisor to Priorities USA, the pro-Barack Obama Super PAC responsible for a much-reviled ad that links Mitt Romney to the death of a steelworker’s wife, today told The Huffington Post that he is proud of his ad. He called it “wildly successful” due to the attention and free air time that it has received. However, unlike your average Real Housewives star, not all press is good press in politics.

“The truth is, there are a lot of sad stories that came as a result of what happened when Mitt Romney was in business,” Burton said to The Huffington Post. “I don’t think those stories should be off limits because they’re particularly heartbreaking.”

“Our spots have been factual and well within the bounds of what we think is appropriate,” Burton continued.

On Wednesday, CNN’s Wolf Blitzer and the network’s fact checkers lambasted the ad to Burton’s face. In that interview, the former White House communications staffer was under such a withering assault that he forced a laugh to highlight how “funny” he found everyone’s outrage. As they say, laugh to keep from crying.

But Blitzer was not the only media personality who Burton lost in this gambit. Morning Joe’s Mika Brzezinski, often quite forgiving of Democratic politicians who overreach in the pursuit of goals she finds noble, wondered why the campaign would simply not disavow the ad once they saw it. Furthermore, she flat out said she did not believe many of the Obama campaign’s excuses for why the ad is not a reflection on the President’s reelection effort.

Earlier this week, we speculated that the ad was a play for earned media due to its length, the early drop of this ad and the fact that it was part of a $20 million dollar online and TV blitz by Priorities. On CNN, Burton said that the ad will air in swing states – doubtful, due to how expensive it would be to air the 60 second spot and how toxic it is for the Obama campaign. But they are now in full-face save mode. Anything is possible in order to make it seem like the folks at Priorities,and the Obama campaign by extension, are not captive to events.

The noble soldiers at the liberal group Think Progress today wrote that the ad, which is focusing the national conversation on “Romney’s impact on the middle class,” is “getting far more bang for its buck thanks to the free media coverage.”

“Fox News and Fox Business provided the bulk of the coverage, mentioning and playing clips of the ad 26 times since Tuesday. CNN and MSNBC played it 15 and 12 times respectively,” writes Think Progress’ Aviva Shen. “The success of “Understands” can be read as a lesson to future political campaigns: launch hyperbolic attacks on your opponent, and the media will reward you with millions of dollars in free air time.”