Bill Clinton Advises Against Ground Troops in Iraq: Makes the ‘Fight About Us’
VIDEO

Bill Clinton Advises Against Ground Troops in Iraq: Makes the ‘Fight About Us’ 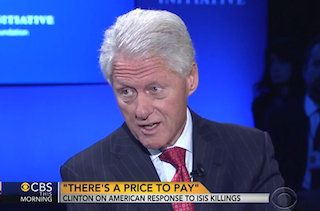 During a sit-down interview Charlie Rose as part of yesterday’s Clinton Global Initiative event, former President Bill Clinton shared his views on the war against ISIS and specifically whether he thinks President Barack Obama will end up putting troops on the ground in Iraq. In a clip that aired on CBS This Morning Tuesday, Clinton explained why he believes that’s not going to happen.

“I think this has a chance to succeed,” Clinton said of the airstrikes against ISIS. Because of the beheadings of American journalists, Clinton said it was “important” to let ISIS know “there’s a price to pay for that, without being sucked into what they want, which is to get you on the ground in large numbers so they can kill more of you and cost you a lot of money and make people think that their fight is against the United States instead of more moderate, decent Iraqis.”

Asked if putting combat troops on the ground will be something Obama ultimately has to do, Clinton said it was “highly unlikely” because the benefits will not outweigh the risks. “Will we be interrupting and stunting the growth of what has a chance to be the first truly inclusive Iraqi government and making the fight about us.”

“There are reasons that he didn’t do that that I think are quite sound,” Clinton added.

When President Obama announced new U.S. airstrikes in Syria Tuesday, he stressed that “this is not America’s fight alone.”