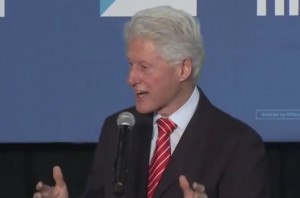 Former president Bill Clinton got in a heated argument with Black Lives Matter protesters as he was campaigning for his wife Hillary Clinton in Philadelphia, battling the protesters over his passage of criminal justice reform.

Clinton tried to address the protesters, but they continued to yell over his answer. “Here’s the thing, I like protesters. But the ones who won’t let you answer are afraid of the truth,” he told the crowd to applause.

One of the protesters yelled that Bill should be charged with crimes against humanity. “Ohohohoho!” Clinton responded.

“I don’t know how you would characterize the gang leaders who got 13-year-old kids hopped up on crack and sent them out on the street to murder other African-American children,” a now visibly angry Clinton shot back. “Maybe you thought they were good citizens… You are defending the people who kill the people whose lives you say matter!”

“You need a president who will tell you the truth, answer the questions, and not be intimidated by people on the far right and far left screaming things that are not true,” he said.