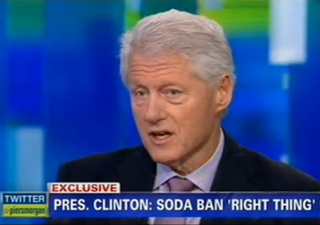 With Piers Morgan on vacation, the host left manning the fort a series of guest hosts spanning all walks of pop culture life, and today it was Harvey Weinstein‘s turn to do the interviewing. His guest? President Bill Clinton, who discussed a little bit of everything, and in the process touched on Mayor Michael Bloomberg‘s proposed ban on large sodas in New York City. Clinton praised the idea, citing diabetes statistics and arguing that these sodas were “very serious problems.”

“I think he’s doing the right thing,” Clinton told Weinstein, explaining that he had seen much of the positive result of health programs through his work with the Clinton Global Initiative to improve school lunches and what is offered in vending machines. He noted that there were a number of outrageous reports– from a 9-year-old diagnosed with Type 2 diabetes to health care for older folks– that make it worthwhile to fight against unhealthy foods.

“I know a lot of people think ‘this is a nanny state,'” Clinton argued, “but there are very serious problems.” The problem was not just fat, he noted, but “a lot of things in our diet that not only make us too heavy, but put too much sugar in our body, which has an enormous amount of people with diabetes… it’s shortening life and undermining the quality of your lfie and exploding our health care system.”