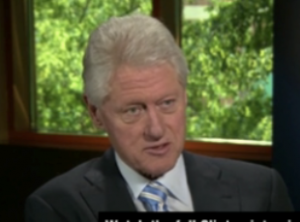 President Bill Clinton has been making the rounds for Team Obama — only to end up making headlines for straying away from President Obama‘s campaign messages. In an interview with CNN’s Wolf Blitzer on Thursday, Clinton affirmed he’s doing everything he can to help the president’s re-election effort, denying that he’s been undermining him.

Clinton said he’s been rooting for the president all along. “Look in 2008, when he ran for president and defeated Hillary in the primaries, I did 40 events for him. Forty in the election,” he said.

Regarding his comments about whether to extend the Bush tax cuts (which many understood to be contradicting Obama’s view, and which Clinton later clarified), Clinton said he misunderstood the deadline by which Congress has to take action. “I’m very sorry about what happened,” Clinton said. “I thought something had to be done on the ‘fiscal cliff’ before the election. Apparently nothing has to be done until the first of the year.”

Further underlining his support, Clinton told Blitzer, “I have spoken up for him whenever I could,” he said — adding, “I have told people repeatedly I think he has done a good job, a really good job under very trying circumstances…I am strongly committed to his reelection.”

About his nod to Mitt Romney‘s “sterling” business career, Clinton marked a difference between personal and political attacks. “My instinct, you know me,” he said, “I don’t think I should have to say bad things about Gov. Romney personally to disagree with him politically.”