Bill Clinton On Romney Praise: ‘I Didn’t Have Any Idea … I Was Wading Into Controversy’
VIDEO

Bill Clinton On Romney Praise: ‘I Didn’t Have Any Idea … I Was Wading Into Controversy’ 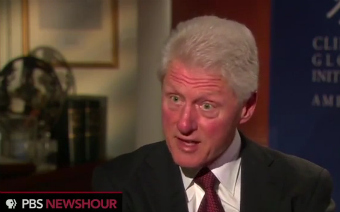 Former President Bill Clinton sat down with Judy Woodruff on Tuesday night’s edition of PBS NewsHour and told the host that when he told CNN that presumptive GOP nominee Mitt Romney‘s business record was “sterling,” he “didn’t have any idea, when I was giving that answer, that I was wading into some controversy in the campaign.”

A recent theme of President Obama‘s re-election campaign was that Republican opponent Romney’s tenure with private equity firm Bain Capital makes him a “job destroyer.” Obama-supporter Clinton veered from that message when he told CNN that Romney’s business record is “sterling” and doesn’t qualify as “bad work.” As such, Woodruff asked Clinton, “Is the Obama campaign wrong to continue to criticize Romney’s record at Bain Capital?”

Not necessarily. It depends on the facts of the case. That’s what I tried to say in the CNN interview. The equity business can be good if you – I’ve got a friend who buys failing companies, and he tries to turn them around. And he’s turned a bunch of them around, but not all of them. So sometimes he tried and failed. The effort was honorable. That’s a good thing.

There are lots of examples over the last 20 years where people used equity to take control of companies, got the companies in greater debt, looted the assets, caused more people to be fired and, in some cases, compromised the pensions. That’s a bad thing. That’s where you’re just — you’re buying something and looting it because you can.

Clinton continued on to explain that he had no idea his defense of private equity would generate controversy:

I didn’t have any idea, when I was giving that answer, that I was wading into some controversy in the campaign, because I haven’t seen the ads, and I’m not following it, and I’m not really part of it. But you’d have to know about a specific case to know whether it was a good or a bad thing. But there are a lot of good people in that business doing good things. That’s the point I was making.

Check out the clip below, via PBS: