Bill Clinton On Today: Voters Should Decide For Themselves If Overseas Tax Shelters Matter In Election
video

Bill Clinton On Today: Voters Should Decide For Themselves If Overseas Tax Shelters Matter In Election 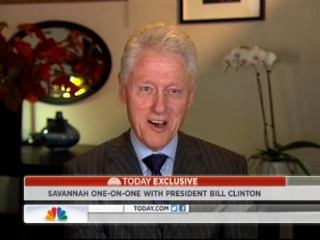 In a wide-ranging interview with new The Today Show anchor Savannah Guthrie, former President Bill Clinton spoke about topics like the global economy, Romney’s business past, tax returns, his upcoming trip to Africa, and more.

RELATED: Bill Clinton: If Barbra Streisand Was In Congress, Would Be On My ‘Just Say Yes’ List

Guthrie followed up by noting that it sounded as if he was saying that Republicans are “rooting” for the economy to fail, Clinton swiftly corrected her, clarifying that he didn’t say that, Senator McConnell did.

On the matter of taxes — particularly President Obama’s plans to extend the Bush tax cuts for the middle class, but raising them on wealthier Americans — Clinton said Obama needs to stand his ground as Republicans urge him to “give away the store.”

Clinton also said he finds research into Romney’s business past completely relevant in this campaign, particularly given past comments Romney has made about how his business background will help become a better leader. He added that he’s “perplexed” by the fact that Romney has released one years’ worth of his tax returns, because “this is the first time in, I don’t know, more than thirty years that anybody running for President has only done that.” Several years’ worth of his tax returns should be released and it should be up to the American people, he said, to decide for themselves whether things like overseas tax shelters will factor into their vote.

The interview concluded with the former president sharing that his trip to Africa will focus on the continent’s progress over the years, highlighting a number of positive steps various African countries have taken as some of the fastest-growing across the globe.