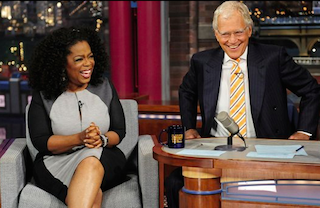 As expected, the big names keep coming for David Letterman‘s final full week as host of the Late Show next week, with former President Bill Clinton and Oprah Winfrey among his guests.

Monday, May 11 will have frequent guest Howard Stern along with legendary comedian Don Rickles. On Tuesday, Clinton will make his 10th appearance on the show, joined by Adam Sandler, who may finally have to address the controversy surrounding his Ridiculous Six movie.

Wednesday is Julia Roberts and musical guest Ryan Adams, Thursday will see George Clooney and a performance from Tom Waits and finally Friday will feature Winfrey and stand-up from Norm Macdonald. The guests for Letterman’s final three shows, May 18-20, have not yet been announced, so we can still hold out hope for Jay Leno and Brian Williams.

While Letterman has not managed to overtake Jimmy Fallon in the weekly ratings since the new Tonight Show host debuted last February, initial numbers indicate that he may have finally done it this past week. Things started out particularly strong on Monday when Letterman hosted President Barack Obama and scored his best ratings since 2012.

According to Nielsen’s metered-market overnights, Letterman had a 3.5 household rating/9 share, beating Fallon’s 2.5/6 and Jimmy Kimmel Live’s 2.2/6. Letterman has topped his competitors in these measures every other day this week since, albeit by smaller margins, meaning he will likely emerge from the week victorious and potentially do even better next week.

Letterman and Winfrey discussed their infamous “feud” on Oprah’s Next Chapter in 2013. Watch video below, via OWN: