Bill Clinton Reveals He May Be A Vegan! (Oh And Talks Some Political Stuff Too) 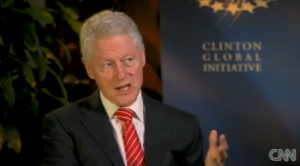 This evening, CNN will air an interview between Wolf Blitzer and Bill Clinton. Clinton’s been making the rounds a lot recently and his answers here are fairly similar to those he’s given in other interviews in the past couple of weeks. So what new facts did Blitzer manage to pry out of our 42nd President? Well, he may be…a vegan!

No, Clinton’s not vying for a spot in a PETA ad, he explained to Blitzer that he cut nearly all meat out of his diet for health reasons. The response came after Blitzer asked the 64 year old how he’s managed to look so healthy recently.

“Well, the short answer is, I went on essentially a plant-based diet. I live on beans, legumes, vegetables, fruit. I drink a protein supplement every morning. No dairy. I drink almond milk mixed in with fruit and a protein powder so I get the protein for the day when I start the day out. It changed my whole metabolism and I lost 24 pounds and I got back to basically what I weighed in high school.

But I did it for a different reason. I mean, I wanted to lose a little weight but I didn’t ever dream this would happen. I did it because after I had this stent put in, I realized that even though it happens quite often that after you have bypasses, you lose the veins, because they’re thinner and weaker than arteries. The truth is that it clogged up, which means that the cholesterol was still causing build up in my vein that was part of my bypass. Thank God I could take the stents.

I didn’t want it to happen again. So I did all this research and I saw that 82 percent of the people, since 1986, who have gone on a plant-based, no dairy, no meat of any kind. No chicken, turkey. I eat very little fish. Once in a while I’ll have a little fish. Not often. If you can do it, 82 percent of people who have done that have begun to heal themselves. Their arterial blockage cleans up. The calcium deposit around their heart breaks up.”

Sure, he sounds convincing but dropping meat is probably one of the few things that smooth-voiced Southerner couldn’t convince most people of doing.

Of course, he also talked about some of politics stuff too. He told Blitzer that he still views an Israel/Palestine deal as “eminently doable.” He also repeated some of the ideas he told Jon Stewart about how the Democrats should handle the upcoming mid-terms.

“CLINTON: I think that the Democrats argument should be, give us two more years. We got our ideas underway. If it’s not better you can vote against us all.

CLINTON: Yes. They gave us — you gave them eight years to dig the whole. Just give us four to get out of it. If it’s not better, go ahead and throw us out. But for goodness sakes, don’t bring back the shuttle brigade.

Then I think they should pivot to saying, to saying what should we do now? We need more jobs, more financing, more training. Here’s what our position is, compare it with theirs. In other words, if this election is a choice about the future, we have a chance to do quite well. If it’s just a referendum on people’s frustration, it’s a bad deal for us. “

It sounded smart last week and it sounds smart again. However, Clinton seems to be making one big error in admitting he’s quit the hamburgers. Does he really think ruining one of the greatest SNL sketches of the past few decades is going to help make Americans like the Democrats again?

Watch the diet discussion below (for some reason, watching Blitzer stoically nod his head as Clinton describes protein powder cracks me up). The full interview will air tonight on CNN.