Bill de Blasio on Trump Meeting: More Must Be Done to Heal the Country
video

Bill de Blasio on Trump Meeting: More Must Be Done to Heal the Country 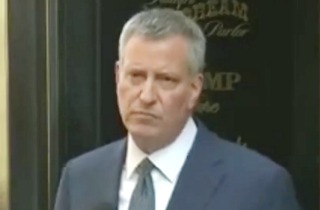 Bill de Blasio had a meeting today with Donald Trump and held a press conference afterwards to reveal what topics he discussed with the President-elect.

The New York City mayor opposed Trump throughout the 2016 election, and he recently promised to defy Trump’s hardline immigration policy and allow New York to remain a sanctuary city. Today, de Blasio said that he talked with Trump about his various political proposals, as well as the concerns that Americans have for the mogul in New York and across the country.

De Blasio said that he warned Trump that his support for measures like stop-and-frisk and a deportation force are “counterproductive” to serving the people. De Blasio said he cautioned Trump against policies that would “drive a wedge” between the police and their communities, and that it’s vital to promote inclusion among Muslims, immigrants, and the various demographics of New York.

“I also raised concerns about some of the messages and some of the rhetoric that for so many people have been hurtful,” de Blasio said. “And I let him know that so many New Yorkers were fearful, and that more had to be done to show that this country can heal, that people are respected.”

De Blasio said the meeting itself was “candid” and “substantive” and that he left the door open for more dialogue with Trump in the future. The mayor promised, however, that he “would be swift to react any time any action is take than will undermine the people of New York City.”

While Trump asked the nation to come together in his acceptance speech, demonstrations against him have occurred every day since Election Day.