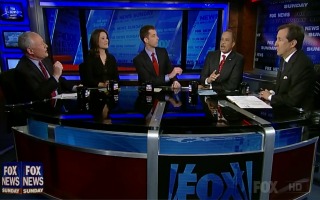 A heated debate erupted on Fox News Sunday’s panel between liberal columnist Juan Williams and conservative editor of The Weekly Standard, Bill Kristol, on Sunday amid a debate about what role President Barack Obama can take in heading off the automatic spending cuts in the sequester. Kristol and Williams battled over whether the onus is on Obama or Congressional Republicans to halt those cuts before they take effect.

“Republicans have to take a responsible posture,” Williams said to Rep. Tom Cotton (R-AR). “I think there’s an overwhelming consensus on Capitol Hill that a lot of those [deduction and subsidies to corporation and interest groups] can be done away with. So, why not work with the president to avoid sequestration that you say would be draconian?”

“Why not just cancel the defense cuts,” Kristol interjected to Williams’ laughter. “What’s so funny?”

“This is not a matter of politics,” Kristol continued. “This is going to gut our defenses. If you were a responsible president – you know, you don’t have to save $45 billion this year. That is 4 percent – 4 percent of the deficit. We’re going to endanger our national defenses and shortchange our men and women overseas for the sake of cutting 4 percent from this year’s deficit? It’s totally irresponsible.”

Cotton said that a major tax reform bill would take many months to negotiate, but there are unnecessary subsidies in the budget which can be eliminated to offset the sequestration cuts.

“So, make a deal,” Williams said. “Bill wants the president to bail out Republicans who made the sequestration deal.”

“I want the president to bail out our military,” Kristol countered. “He’s commander-in-chief. Maybe you’re not aware of that.”

Watch this exchange below via Fox: