Kristol: Palin Can 'Ressurect Herself' Via Alaska Senate Run
VIDEO

Bill Kristol Calls for Palin Comeback: Can ‘Resurrect Herself’ With Alaska Senate Run 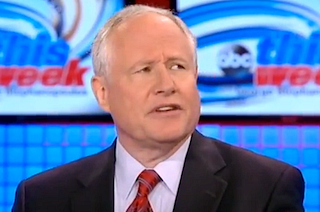 Weekly Standard editor Bill Kristol, one of Sarah Palin’s earliest and most emphatic supporters in 2008, is once again promoting her cause, this time claiming during an online Q&A with ABC that Palin could “resurrect herself” by becoming the junior Senator from Alaska.

“I think her stepping down as governor of Alaska was a big problem,” Kristol said. “People don’t like to see a candidate, a governor or an executive—absent some medical reason or whatever—just leave office early. And she had been a good governor, sadly, of Alaska until then. So I think that is something she has to recover from, in terms of being a serious leader in the party. She still has a lot of loyalty, still can shape the debate. She still has a great political touch.”

“I think the way Palin would possibly resurrect herself—if that’s the right word—or rehabilitate herself, I guess is a better way of putting it: run for Senate in Alaska in 2014,” Kristol said. “I’m not urging that. I’m just saying, if I were her adviser, I would say, ‘Take on the incumbent, you have to win a primary, then you have to beat an incumbent Democrat. It’s not easy.’ But if she did that, suddenly, if you can imagine that—Sarah Palin, freshman senator, January 2015 in Washington having beaten an incumbent. That would be pretty interesting.”

Kristol also defended his promotion of Palin in 2008. “I was for taking the gamble of putting her on the ticket, I don’t think it hurt the ticket in 2008,” he said. “In fact, the best two weeks for the McCain campaign against Obama 2008 were the two weeks after he picked Sarah Palin. Then she had a little bit of a roguh patch, she was mishandled by the McCain people.”