Bill Kristol: Conservatives Being ‘Too Obsessive’ About Lack Of Coverage Of Obama’s Gaffes 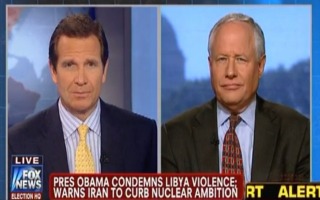 Bill Kristol, editor of The Weekly Standard, appeared on Fox News Channel where he was asked about charges made by conservatives that the political press is more willing to criticize Mitt Romney for his misstatements than they are for President Barack Obama. Kristol said that conservatives run the risk of cheapening their message by focusing solely on Obama’s gaffes and not his policy. He says that substance will be how voters make their ultimate decision.

Jon Scott read a portion of a column in the New York Post by John Podhoretz who lamented that the press has abdicated its watchdog role in their coverage of President Obama’s misstatements and gaffes. Kristol did not agree and added that it is dangerous for conservatives to become overly fixated on perceived biases in media coverage of the campaign.

“Honestly, conservatives are being a little too obsessive about individual sentences President Obama says,” said Kristol. “Voters aren’t going to make their mind based on that, they’re going to make up their mind on four years of record and what the Romney alternative is.”

“The Romney campaign, I think, falls in the trap of becoming the speech critic of Obama,” Kristol continued. “People like us should do that, it’s perfectly appropriate. But, as a political matter, people are going to make their mind up on the policies.”

Kristol said that voters may not be satisfied with Obama’s record but that does not mean that they are prepared to throw him out of office without a compelling alternative. He said that Romney has a “subtle” challenge, needing to make his case without being overly critical of the sitting president on matters that are not related directly to policy.