Bill Kristol Doubles Down On Tax Hikes For The Wealthy: GOP ‘Will Cave,’ Just A Matter Of When 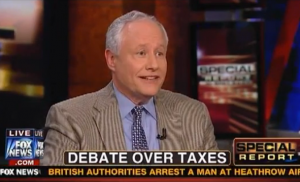 The Weekly Standard’s Bill Kristol joined Bret Baier‘s panel on Monday to discuss the debate over tax rates as Congress approaches the so-called fiscal cliff. Very much in line with the comments he made yesterday, Kristol said Republicans shouldn’t be picking a fight against raising taxes on the wealthy. It’s a “mistake,” he said, urging a look at the bigger picture.

RELATED: Losing Their Religion: Bill Kristol Says ‘It Won’t Kill The Country If We Raise Taxes On Millionaires’

Republicans have to hold the line on something, and that is on rates,” Charles Krauthammer argued. “Liberals are congenitally unable to understand the difference between raising rates and raising revenues. […] If [Republicans] give in on rates, they’re going to get rolled.”

Obama has a mandate, he added, but so do Republicans. Baier then turned to Kristol, bringing up the remarks he made on Sunday.

“It won’t kill the country if we raise taxes a little bit on millionaires. It really won’t, I don’t think. I don’t really understand why Republicans don’t take Obama’s offer,” Kristol said on Fox News Sunday. “Really? The Republican Party is going to fall on its sword to defend a bunch of millionaires, half of whom voted Democratic and half of whom live in Hollywood and are hostile?”

Baier contrasted that remark with comments Kristol made in 2009, wherein he argued that raising taxes would be the “stupidest thing you could do” amid economic woes.

Kristol noted that if the Bush tax cuts expire, taxes go up for everyone in the country — adding that it’s not “winnable” strategy for Republicans to hold onto the fight against raising taxes on millionaires.

“At the end, Republicans will cave,” he said. “The question for me is, do you cave right now — get it out of the way, four percent, do it for a year if you want, just for a year — … get it out of the way so we can fight about tax reform. So we can fight about the big deal that has to happen next year. Or, Republicans are going to cave on December 29th in my view.”

Kristol further pointed to a period of time under President Ronald Reagan when economic growth was strong. And what were the top marginal rates then? Fifty percent. “Honestly, 35 to 39 percent, by itself, is not going to cripple the economy.”

It’s the president’s plan, he said. So let him implement it, and if it fails, he’ll be held accountable. But “picking the fight right now on the expiring Bush tax cuts is a mistake.”