Bill Kristol: What’s the Harm in Bombing ISIS and Seeing What Happens?
audio

Bill Kristol: What’s the Harm in Bombing ISIS and Seeing What Happens? 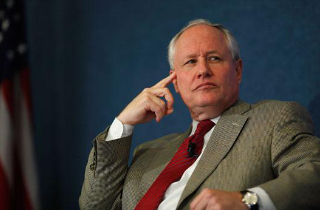 Bill Kristol wants to bomb first and figure it out later. News at ten.

During a Monday interview with Laura Ingraham on the ongoing situation in Iraq, the Weekly Standard founder discussed his desire to forgo national debates and simply bomb ISIS forces immediately.

-RELATED: How Does He Keep Getting A Platform? Bill Kristol’s History of Terrible Predictions and Bad Advice

Kristol agreed. “Intellectuals overthink things,” he said. “We allied with Stalin in World War II, and helped create the captivity of Eastern Europe, you could argue… We got involved in Afghanistan to bring down the Soviet Union and probably helped create, indirectly, some of what came about in Afghanistan and ideas that led to 9/11. That’s life. Maybe we could have been cleverer in all these cases, but often, when you mess around in the real world, you have unintended effects and some of them are bad.”

However, the neoconservative pundit continued, “We’re underestimating the ability of what the use of force — even from the air, even with some people on the ground to help out — how much that could do.”

After mimicking his fellow talking heads who suggest that perhaps it’s best to have a national debate before using military force, Kristol then said: “What’s the harm of bombing [ISIS] at least for a few weeks and seeing what happens? I don’t think there’s much in the way of unanticipated side effects that could be bad there. We could a lot of very bad guys.”

Listen below, via The Laura Ingraham Show: