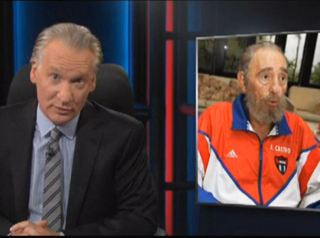 It has been a long week of people saying things they really shouldn’t say on outlets that reach the eyes and ears of millions. No matter how steep the competition, however, the good money is on Bill Maher taking the prize for “most outrageously offensive statement” in any given week. This week is no different as the pseudo-pundit/not-quite-comedian attempted to talk about the horrors of communism in Cuba, and ended up telling the Miami “machos” who oppose authoritarianism to stop whining.

Maher decided to make his “New Rules” segment on Cuba, tagging it to the recent controversy over baseball person Ozzie Guillen saying he “loved” Castro and subsequently receiving professional rebuke. “Fidel Castro is not worse than vampire Hitler and Cuba is not North Korea crossed with Hell,” he began. He didn’t really corroborate any of this statement, however, instead moving on to comparing Guillen’s suspension to a communist “reeducation camp” and joked that giving up free speech would “make us look like Cuba, and that would be a living Hell because they’ve got free health care.”

“He’s the political equivalent of Keith Richards!” Maher asserted, later adding, “the problem with Castro’s evil isn’t it being minimized, it’s being exaggerated,” Maher argued, thus once again minimizing Castro’s evil and completely disproving his point. He went on to argue that “there are worse dictators in Saudi Arabia, Yemen, Oman, Equatorial Guinea, and Turkmenistan– and those are just our friends.” He faulted Guillen with breaking “one of the great unspoken rules in American public life: don’t fuck with Miami Cubans, because they are tough.” Funny, if there’s a rule about “not fucking” with Miami Cubans, almost every Republican candidate for anything seems to have missed the memo.

Maher concludes insisting that the “machos” in Miami should realize that Castro looks like a “Jewish grandmother” at some point and just stop talking about the dictatorship. It’s hard not to think that, sixty years ago, Maher would be the guy insisting America has no right to fight Nazis in Germany because Roosevelt sat down with Stalin, and telling American Jews to stop whining a shouty failed artist.

Not all of Maher’s screed is logically wrong; it’s morally wrong. He has the pieces in the right places—yes, China and Russia are states run by inexcusably autocratic regimes. Yes, condemning Cuba without condemning Russia or Saudi Arabia or Belarus makes no sense. Evil is evil no matter where on the surface of the earth it arises. The disconnect leads to a natural solution: to treat all nations that deprive human beings of their natural rights, that force critical thinkers to cash in their diversity for years in labor camps with the same level of contempt. But Maher doesn’t call American diplomats to condemn Russia or China or Syria with the same bravado is does Cuba, as it should—he’s way too lazy for that. Instead, he proposes a policy of willfully ignoring injustice and hoping it goes away, maybe.

As a wealthy, white, prominent American television host, it’s very easy to see the appeal of Maher’s “out of sight, out of mind” policy regarding Cuba. The problem with the Cuba situation, from Maher’s perspective, is that some Cuban exiles are making noise on his TV, and it is annoying him. So the solution to this pressing issue of Bill Maher being annoyed by something on television has one only solution: telling the people speaking to shut up, so Maher can go back to his bread and butter of calling all black people gangbangers while calling Republicans racists.

Not all of us can afford to think like that. Not all of us consider “Bill Maher is annoyed” to be the most abject tragedy regarding communism in Cuba. Some consider it to be the deplorable conditions of their barely-existent health care system, or the serious problem of child prostitution, or the compulsory parades of glory and ceaseless barrage of Soviet-knockoff propaganda. Others object to the severe economic inequality that finds most of the nations population starving outside of gates of the opulent hotels for tourists and palaces of party leaders. Others still the tortured and starving political prisoners—some there for speaking out against communist policies, others for having long hair or being gay (“anti-socialist morality”).

Guillermo Fariñas, Cuban psychologist and political prisoner, cannot afford to think like Maher. Fariñas is one of the more prominent dissidents on the island after receiving several awards and participating in more than 23 hunger strikes. His longest lasted 18 months. His latest resulted from the death of another political prisoner, Orlando Zapata Tamayo, died of an 85-day hunger strike. He was most recently arrested in January again. Fariñas recently asked the Pope to bless the island’s political prisoners with a meeting. His request was refused; Hugo Chavez’s was not. Only international attention has kept Fariñas alive. This is what Fariñas’ body looked like, at the peak of one of his strikes.

This is who Bill Maher denigrates when he calls Fidel Castro a “badass.” This is who he wants us to forget.

The irony, of course, is that Bill Maher wouldn’t last ten minutes in Cuba without getting arrested, beaten, tortured, and put in isolation. And it wouldn’t be out of any particularly noble political convictions—he would just get bored of listening to some interminable Raul Castro diatribe and say something to the effect of “shut up” within earshot of a member of the Committee of the Defense of the Revolution (the tattles that survey neighborhoods in search of unlawful ideas). That’s all it takes. And something tells me Maher wouldn’t take to being a political prisoner with the dignity Fariñas has.

But Maher has no power over the impact of his words; it is in the hands of the public to loudly condemn them. And yet the sad truth is that the plight of the Cuban community has a way of being swept under the rug, overlooked for more relatable dramas. The odds of one single conservative who called for President Obama to return Maher’s million dollar donation because Maher said something mean about Bristol Palin, a pseudo-political reality TV star of no real significance, to call for the same due to these comments is slim to none. They didn’t do it when Maher demanded than Obama stick a gun in his pants and act like a “real black person.” And every single person who thinks him using an ugly word about a privileged and free young woman is worse than him dismissing the suffering of millions of people is just as guilty of the breed of depraved ignorance in operation here. Every one of those people feeds the vicious cycle.

This is not to isolate conservatives– on the contrary, to highlight how easily such heinous words can fall through the cracks. For instance, there is no reason for GLAAD to not call for the condemnation of Maher’s idiocy. The Cuban government’s oppression of LGBT folk has been a very real problem for half a century—let’s just say there’s a reason the Castros hang out with Mahmoud Ahmadinejad. Anyone who has read Reinaldo Arenas’ classic autobiography Before Night Falls (or seen the Javier Bardem film) will have a functional understanding of how easy getting arrested for homosexuality can be. GLAAD has taken the time to force political talkers to chat with them after expressing disapproval of David Beckham‘s underwear. Surely mocking those who oppose praising someone who actively imprisoned LGBT people systematically merits at least a round-table discussion?

In a political climate where making a statement on television can be akin to navigating a minefield– and the nation appears in a constant stalemate over which side is outraged over what– this should be a fairly clear example of something we can all agree is inappropriate, ugly rhetoric. We owe it to those who have given their lives and so much more to fight injustice and tyranny not to let Bill Maher silence us because he finds the tragic reality of Cuba boring.

The clip via HBO below: